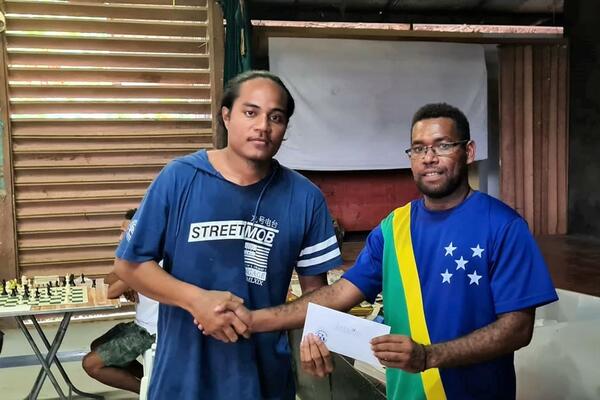 Fred Resture has won the National Youth Rapid Chess Championship held on the 20th and 21st of February 2021 in Honiara.

Organized by the Solomon Islands Chess Federation the championship was said to be a success. The championship brought together chess players between the ages of 15 and 34.

The Oceania Zone 3.6 Championship is geared towards selecting a representative player for the 2021 World Cup in July. At this stage the World Cup is scheduled for Sochi, Russia.

The Oceania Zone 3.6 President Paul Spillar says more details of this should be available and publicized within the next week or so.

''The tournament will use the FIDE Hybrid tournament rules that has been approved at the Asian Chess Federation Executive Board meeting held on Monday 15 February,” the Zone President said.

"As a federation we are excited and will arrange sessions with Fred to prepare well for the Online zonal tournament and the laws involved’ said our qualified FIDE Development instructor James Jr Samu.

Most of the players expressed their gratitude for the successful tournament and are looking forward to the next tournament. Players at the close of the championship were also encouraged to form chess clubs as future competitions will be in teams as well as individuals.

Meanwhile the Solomon Islands representative will be conveyed to the Oceania Zone 3.6 President before the deadline of submission, which is 7th March, 2021.