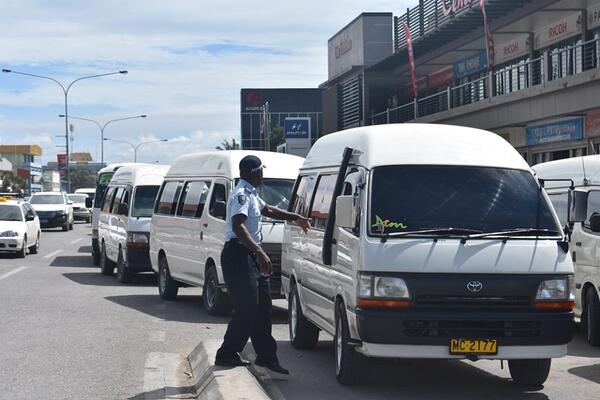 Members of the public in Honiara have been urged to respect traffic signs including traffic cones placed on roads as the Royal Solomon Islands Police Force (RSIPF) conducts an operation to address the traffic congestion in some parts of the capital city.

“Traffic officers from the Kukum Traffic Centre as well as officers from Honiara Central Police Station as well as from Henderson Police Station are involved in a four-week operation to address the traffic congestion at the Honiara Central Market and Central Magistrates’ Court bus stops and the Fishing Village Market,” says Superintendent Fred Satu, Director of the Traffic Department.

Last Sunday 30 June 2019, traffic officers arrested and charged several drivers at the Fishing Village Market after they removed traffic cones at a no parking area at that Market.

Superintendent Satu says, “Police will arrest and charge anyone who disregards traffic rules and regulations. This is to ensure the actions of a few people do not make our roads unsafe for the rest of our law abiding road users.”

“I further call on bus drivers using the Honiara Central Market and Central Magistrates’ Court bus stops to stop at the bus bay merely to drop and pick passengers and not park. Passengers are also encouraged to stand at the appropriate stop for their destination so as not to delay the buses unnecessarily.”

Police also encourages members of the public to use designated pedestrian crossings including the underpass at the Honiara Central Market so as not to endanger their lives as well as slow down the traffic.

“Police alone cannot address the challenge we all face with the traffic congestion in our capital city. We will try our best despite the limited resources but if members of the public including bus drivers and other vehicle drivers cooperate with other stakeholders then the issue can be resolved amicably,” says Traffic Director, Superintendent Satu.

The RSIPF will be conducting a major operation as the country prepares to celebrate its 41st anniversary of independence starting this coming weekend. This will include high visibility patrols as well as random breath testing (RBT) on the roads in Honiara and some of the provincial centres.