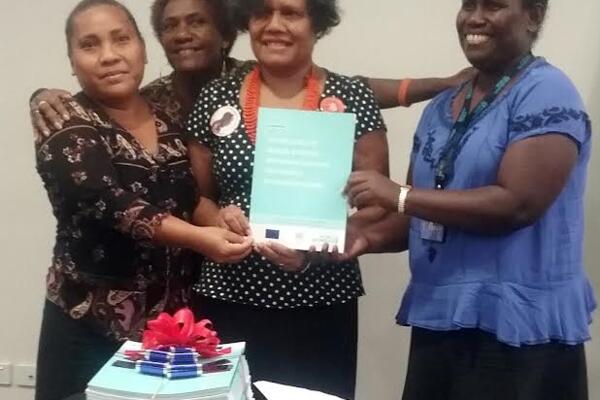 New research investigating barriers for female electoral candidates in the Solomon Islands has revealed that voters are willing to vote for a woman if they are perceived to be able to contribute financial resources to the community; and have a track record of community service.

This presents a clear obstacle to women running for election, as they are less likely to possess personal wealth and have limited access to constituency development funds.

The research was commissioned by UN Women as part of the European Union-funded Strongim Mere Programme in Solomon Islands, which aims to increase the number of women running for election with party support.

The research report was launched last week at the Solomon Islands National Women’s Summit and Dialogue in Honiara. The summit was supported by UN Women and UNDP’s joint programme on peace and security, funded by the UN Peacebuilding Fund, and organised in partnership with the Ministry of Women, Youth, Children and Family Affairs.

Permanent Secretary for Ministry of Women, Youth, Children and Family Affairs, Ethel Sigimanu said, “it is because of those obstacles and the resulting under-representation of women in high-level decision making posts, that the need arises to apply affirmative action measures that help overcome the restrictions that women face in attaining real equality of representation. We cannot talk peace without equality between women and men. Maintaining and promoting peace and security requires women’s equal participation in decision-making,” she said.

Despite efforts by the governments, donors and civil society organisations to increase levels of women’s participation in parliament, women’s representation in Solomon Islands Parliament currently stands at 2%.

Representative for UN Women’s Fiji Multi-Country Office, Aleta Miller said, “the importance of such research in guiding initiatives to increase levels of women’s participation in leadership spaces cannot be overemphasised. Women must be involved in decision-making and it has been proven time and again to have positive outcomes for communities, and the economic and social development of a country. Development cannot happen without women.”

While the report digs deep into the interconnected and complex nature of the barriers faced by women electoral candidates in Solomon Islands, it also hints at opportunities to engage with grassroots women’s networks, and leverage voter dissatisfaction with male political leadership in candidates’ advocacy and communication strategies.