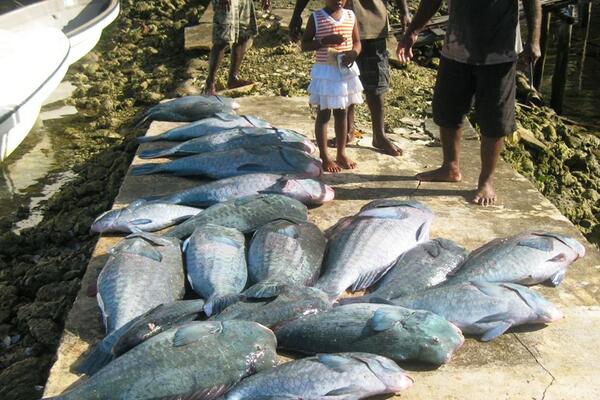 A marine scientist is warning Solomon Island landowners that logging will kill nearby reef fisheries within a decade leaving future generations with neither timber nor marine resources to support their families with.

Fringing reef destruction is primarily caused by poor land use practices releasing excessive silt into waterways, primarily through logging operations. The silt is washed into mangrove and sheltered reef systems where it settles on corals, quickly killing them.

“This was a big surprise for us. We initially thought that topa fish declines we are seeing throughout the world were solely due to overfishing. However, this research showed that baby topa are only found on these lagoon reefs and, where there has been heavy logging, all the nursery habitats have been destroyed.”

The Nature Conservancy (TNC) scientist described the lagoon reefs as “fish factories” for all fish species because they provide abundant coral formations that protect very young fish, are sheltered from severe weather and are linked to outer reefs where many fish migrate to once they mature.

Once silt kills the coral, however, juvenile fish do not settle or ‘recruit’ to these reefs:

“There will still be adult fish on the outer reefs adjacent to the nursery areas, but once that population has been fished out or dies, no new fish will come through to replace them.”

The Nature Conservancy says the research underlines the importance of its Ridges to Reef Conservation strategy supported by the Ministry of Environment, Conservation and Meteorology.

TNC Solomon Islands programme manager Willie Atu says, “This research shows just how important a Ridges to Reef Conservation plan is. We cannot view reefs, fish or forests as separate entities. These systems are all connected and this research underscores just how important a complete ecosystem approach to fisheries management is, both to the Solomon Islands and the Coral Triangle as a whole.”

Hamilton says the topa species was selected because it is a “keystone” fish for both the reef habitat and the fishing industry. “Adult topa grow to more than 1.5m long and can weigh more than 50kg. They eat corals and produce sand, which is vital for the on-going health of reef systems. It is estimated that a large adult topa can eat 5000kg of coral each year.

“Topa is also an important commercial fish in the Kia district,” says Hamilton. “It has the unfortunate behaviour of sleeping in large schools at night, making it very vulnerable to night spear fishing. It is still possible to catch 500kg of bumpheads in one night around Kia,so it’s a favourite for local fishers, who are paid by the weight of their catch.”

He estimates that the bumphead fishery alone injects about SBD$250,000 into the Kia economy annually.

Hamilton says the research findings are “black and white”. “We surveyed 20 sites near logged areas around Kia, we didn’t see any juvenile topa and all the reefs were dead through siltation. We surveyed the same number of sites near unlogged areas and there were baby topa everywhere.

“The take home message is clear: if you cutthose remaining unlogged islands, you’ll lose your fishery. Within 10 to 15 years you won’t have adult fish on the outer reef either. If you want to preserve your fisheries, you have to look at sustainable land-based practices. Just don’t log it.”