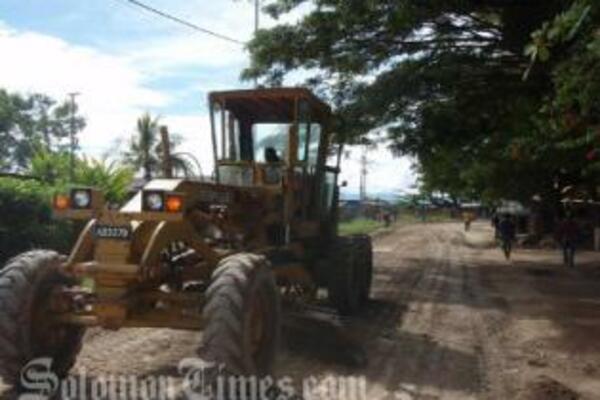 Under the Solomon Islands Emergency Assistance Project (SIEAP), 2.05 kilometers of the main road through Gizo will be rebuilt and drainage improved, and 1.2 kilometers of the road will be resealed.
Source: Photo Supplied
Share
Monday, 15 June 2009 10:05 AM

Work has begun to repair Gizo town road after it was severely damaged following the earthquake and subsequent tsunami which devastated parts of the Solomon Islands in 2007.

Co-financed by the Solomon Islands Government, the Asian Development Bank (ADB), and the European Commission, SIEAP aims to restore the economic and social activities in affected areas to pre-disaster levels through the rehabilitation of essential infrastructure. Restoring roads, wharves, and bridges, is expected to facilitate recovery, rural development, poverty reduction, and economic growth.

Gizo is the second largest town in the Solomon Islands, and serves as the provincial centre to the Western Province. In April 2007, a massive undersea earthquake triggered a tsunami that devastated parts of Western and Choiseul provinces in the western Solomon Islands. Fifty two people were killed, thousands were left homeless and vital infrastructure was destroyed. Gizo was closest to the epicenter of the earthquake and sustained some of the worst damage.

SIEAP is rebuilding and rehabilitating essential infrastructure that was damaged or destroyed in the tsunami, including about 35 kilometers of rural and town roads, 19 bridges, and five wharves and jetties. It will also facilitate the repair of the Gizo town water supply and sanitation system.

The Solomon Islands remains vulnerable to the spread of HIV/AIDS. SIEAP will also supply workers and communities involved in the rehabilitation of damaged infrastructure with appropriate information and prevention advice about HIV/AIDS infections.

Other recent achievements of SIEAP include the introduction of several new water storage tanks, which form part of the rehabilitated water supply system in Gizo.