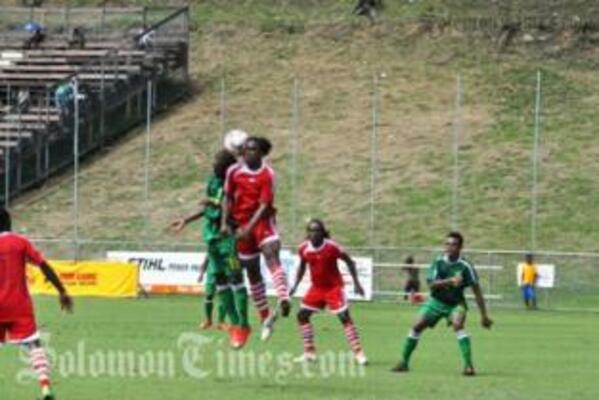 Last Saturday, the Rendova Devon pulled off a magical effort to share points with Koloale in the Our Telekom National Club Championship Group B match played at Lawson Tama.

The match ended in a 0 - 0 draw but it was filled with action and scary moments for supporters of both teams.

The defensive format set up by Rendova Devon was enough to keep Koloale's big names from finding the back of the net for the entire match.

Despite holding the lion's share of the ball possession Koloale found themselves up against a brick wall whenever they ventured into the Rendova Devon 18 yard box. Benjamin Totori, Henry Fa'arodo and Mostyn Beui were playing at 100 per cent but the lining on the Rendove Devon defence was simply too thick.

Nevertheless there were moments of brilliance from the 2 teams that brought out the best in their goalkeepers. Charles Sale, who was manning the gates for Rendova Devon provided some of his best performances in this game as he stretch and jumped to block shorts from Koloale's arsenal of top players.

The same story was repeated in the second half with most of Koloale's advances shut down outside the Rendova Devon 18 yard box and they found very little space to get shots off.

On the other end of the field the Rendova Devon had too much space but too little ball to play with.

The best scoring chance in the game belonged to Rendova Devon when their striker picked up a miss pass from Shadrack Ramoni, the Koloale goalkeeper and beat him only to see his shot cleared off the line by Cecil Buru who had to race at full speed to save Koloale from what would been an embarrassing situation.

At the end of the match the Rendova Devon players were the happier ones smiling as they walked off the field. They set themselves a goal, devised a strategy and got themselves the point they wanted from the game.

The draw puts Koloale at 10 points and they lead the Group B table. Rendova Devon are in second place with 5 points and with a good chance of going through to the quarter finals.

Both teams have now played all their group matches.