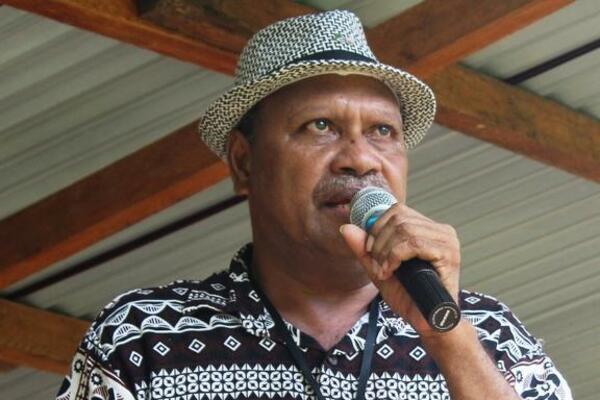 Suidani says Malaita province already made its stance clear in the Auki Communique. He says the Auki Communique clearly states that they reject China and its formal systems.
Source: File
By Georgina Kekea
Share
Tuesday, 08 September 2020 10:25 AM

Malaita Premier, Daniel Suidani says he is saddened by the removal of the Provincial Secretary Mr. Frederick Fa’abasu.

Suidani says the latest move by the national government is a direct action against the Malaita provincial government.

He claims the Sogavare led government does not want Malaita to progress and that the Prime Minister “no longer has an interest in the affairs of the country, but for his own political power.”

In his weekly statement today, there was no mention of the uproar in Malaita province by the Prime Minister. The Prime Minister’s weekly address was purposely for COVID-19 updates.

However the Prime Minister only mentioned that despite the criticisms, his Government remains steadfast, focused and committed in their fight, and that is to protect the people and keep our economy afloat.

The Ministry of Provincial Government and Institutional Strengthening (MPGIS) however has issued a media statement, prior to the removal of Fa’abasu as the provincial secretary.

MPGIS statement was on the proposed Malaita referendum to be held this month. MPGIS says the referendum is illegal and the provincial government cannot carry out a referendum.

It was last week that the Malaita provincial premier announced the intention of his government to carry out a referendum for the people of Malaita.

Suidani said this referendum comes as Malaita province continues to be pressured by the National Government to accept China.

With the onset of attacks by the National Government, Suidani says it is clear the Sogavare government is only interested in pleasing the People’s Republic of China (PRC).