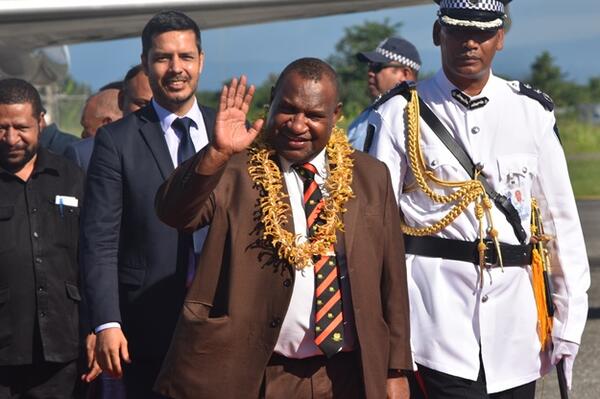 PNG Prime Minister, James Marape, was treated to a red-carpet welcome in Honiara on arrival today afternoon. Marape is in Solomon Islands on an official state visit.

Marape is leading a business delegation from PNG. The delegation comprises of government and private officials. This is Marape’s first official visit to Solomon Islands. Upon his arrival at the Henderson airport, Marape was treated to a traditional welcome by local pan pipers and traditional drum beaters.

He also inspected a guard of honor before paying a courtesy visit to the Governor General of Solomon Islands, H.E Sir David Vunagi at the Government House. In the evening, a state dinner will be hosted for the PNG Prime Minister and his delegation.

In Honiara Marape will hold bilateral talks with Solomon Islands Prime Minster, Manasseh Sogavare. It is anticipated that discussions between the two leaders will be a follow up of their previous discussions held in Port Moresby.

It was also during their discussion in Port Moresby that Marape pledged his support to Solomon Islands for the Pacific Games which Solomon Islands will host in 2023. It is still not clear whether Mr. Marape will visit the site of the National Institute of Sports while in Honiara.

Other official visits of the PNG Prime Minister will be to the Guadalcanal Plains Plantation Limited (GPPOL), a private business mostly owned by New Britain Palm Oil Limited of PNG.

Also in the official program, both Prime Ministers will have a business luncheon with members of the private sector. It is understood that a good number of members from the private sector are also part of the PNG delegation.

On Saturday, Marape will spend most of his time at the Betikama Adventist College. There he will attend a church service with the Solomon Islands Prime Minister, Manasseh Sogavare.

PM Marape is being accompanied to Solomon Islands by a number of his Ministers in the government.

The PNG delegation is scheduled to leave Honiara, Saturday evening.