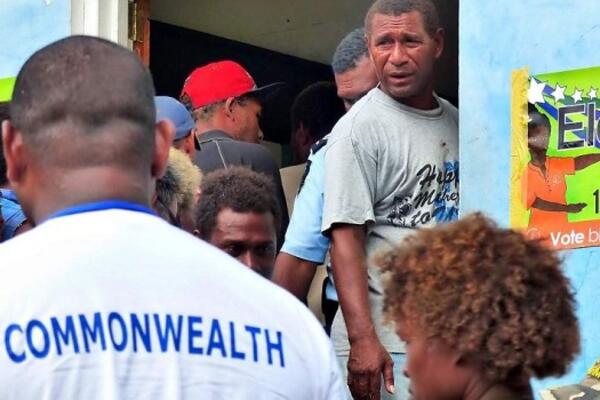 “These are figures that we should all be proud of. They represent a significant milestone in the management of clean and fair elections in Solomon Islands.”
Source: Photo supplied
Share
Tuesday, 02 December 2014 08:09 AM

The Solomon Islands Electoral Commission (SIEC) has confirmed that the recent National General Elections recorded the highest ever voter turnout, with 89.93% of all registered voters casting their ballot.

“This is a great success for the SIEC and for our country as a whole,” Chief Electoral Officer, Mr Polycarp Haununu said.

“I would like to acknowledge everyone who made the effort to get to their polling station on Election Day and exercise their democratic right.”

In the 2010 National General Election, voter turnout was just 52.4%, though the Commission says that figure does not take into account the large number of multiple registrations and deceased persons that were on the roll prior to the introduction of Biometric Voter Registration.

The SIEC says the voter turnout figure compares favourably with other countries in the region.

“The high turnout is particularly pleasing, following the success of the new Biometric Voter Registration system.”

“It is difficult to say exactly what percentage of eligible voters registered because accurate data about the number of eligible voters is not available. Using census data and with the assistance of the National Statistic Office, we believe it is around 85%,” Mr Haununu said.

“Even in a country like Australia, where voting is compulsory, only 92.5% of eligible voters are registered. Fiji also recently achieved a remarkable result, with more than 95% of the eligible voter population registering.”

The SIEC has also revealed that the number of rejected ballots was at a record low.

“The percentage of votes that were rejected during counting was just 0.63%,” Mr Haununu said.

“That means that out of every 1000 votes cast, only six were filled in incorrectly.”

This compares with 0.75% in the recent Fijian National Election and 1.17% in New Zealand

“These figures show that our officers, particularly our officers in the field, were highly successful in explaining the voting process and how to correctly mark a ballot paper,” Mr Haununu said.

“These are figures that we should all be proud of. They represent a significant milestone in the management of clean and fair elections in Solomon Islands.”