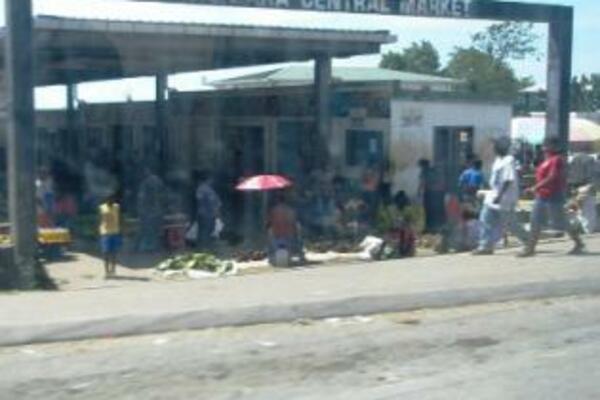 All four were knifed and beaten up at separate times on Saturday 21 April at the Honiara Central Market.
Source: Photo Supplied
Share
Monday, 30 April 2012 07:53 AM

Families of four victims attacked in Point Cruz this month met with representatives of the perpetrators in a reconciliation ceremony to stop further retaliations in Honiara.

The victims included public servant, Simon Fuo of Kwara'ae, two students - one from Makira, one from East Kwaio and a security officer from Baegu.

All four were knifed and beaten up at separate times on Saturday 21 April by a gang of men from Saua, an island group in the Baegu-Asifola Constituency, at the Honiara Central Market.

While Fuo had died from injuries sustained from the attack, the other victims survived.

Relatives and wantoks of the late Fuo reacted by burning down five houses at Koa Hill that same day, prompting Malaitan leaders to arrange a reconciliation ceremony to stop further violence from both parties.

Held at the Rove Police Headquarters yesterday morning, the reconciliation ceremony was conducted by Reverend Philemon Riti and had involved the delivery of shell money and cash believed to be funded from the Baegu-Asifola constituency's RCDF.

The other victims families also received cash but the amounts were undisclosed.

SIBC News understands Deputy Prime Minister Maelanga gave an undisclosed amount of money to the Sawa representatives in compensation of their five homes that were burned at Koa Hill.