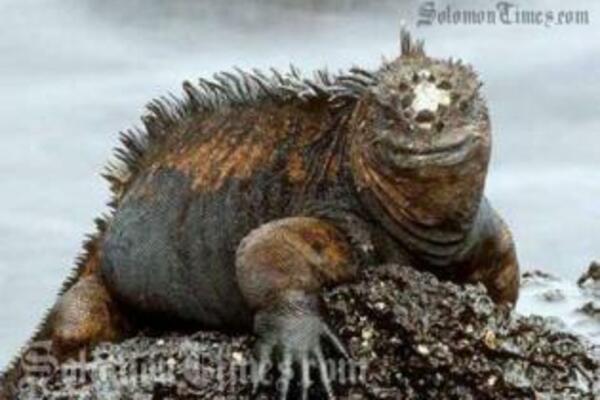 The marine iguana that is worrying islanders of Qamea Island in Fiji.
Source: Fiji Times Online
Share
Wednesday, 18 November 2009 05:00 AM

A marine iguana which has been causing fear among inhabitants of an island in Fiji is currently being studied by experts who have said that it is a rare species of iguana.

Islanders of Qamea Island have started to fear going out to sea since the rare species has spread in the area killing marine life, according to Fiji Times Online.

The villagers describe the creature as fearful-looking and believe it was introduced from the US by a foreigner in 2003.

Pita Tabua, of Naivivi Village on Qamea, said only one marine iguana was brought in as a pet.

"We believe it escaped and lived in a part of the forest on the island," Mr Tabua said.
"Today there are so many marine iguanas in Qamea and now they also live on Matagi and Laucala islands," Mr Tabua said.

According to the report, Mr. Tabua said 'the frightened villagers had cut back on fishing trips as a result of the presence of the animal'.

"These iguanas eat fish and other sea food we depend on," Mr Tabua said. "Even the women are frightened to go out netting in shallow waters or the mangroves.

"It does not look like our own crested iguana, it looks like a small crocodile with a dinosaur's head. They're large as a man's arm and some are more than a metre long," he said.

Mr. Tabua said that the animals "live in the forest and the sea. Sometimes when they see people approaching, they crawl towards the sea and swim like human beings".

According to Fijilive, Fiji's Quarantine Department is sending a second team to further investigate with Director Bio-Security, Foraete Hiagi, telling FijiLive that 'the specimen had been brought down to the University of the South Pacific where experts were working on it'.

According to the report, Mr. Hiagi said 'tests would have to be done to determine whether the iguana, first reported by the villagers in mid-2009, was of local or foreign origin'.

He said a team made up of animal and fisheries experts and those from USP would be leaving for Qamea to find out the circumstances under which the discovery had been made.