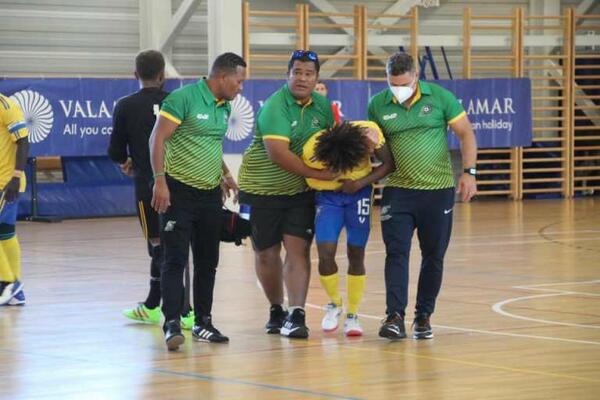 Raphael Lea’i was taken to the hospital after an injury against Italy.
Source: SIFF Media
Share
Thursday, 02 September 2021 13:14 PM

Solomon Islands top striker Raphael Lea’i has suffered an injury during a friendly match with Italy.

The Solomon Islands national futsal team are currently in Croatia and participating in the Futsal Week Summer Cup ahead of the FIFA Futsal World Cup, which kicks off in Lithuania on September 12th.

Lea’i was helped off the court in the first half of a match against Italy, which the Solomon Islands ended up losing 3-0.

“Raphael Lea’i has been taken to the hospital by our team doctor for a injury sustained in the first half against Italy,” the Kurukurus wrote on their Facebook page.

The talented youngster was later shown to have a cast on his arm.

“Medical result confirmed that Raphael Lea’i has a fractured right arm sustained in the game against Italy,” a statement read.

He is now expected to be sidelined for up to three weeks, which could mean he misses the entirety of the Futsal World Cup.

“According to the medical report he will be sidelined for up to three weeks which will jeopardize his chance to play in the FIFA Futsal World Cup Lithuania. The rest of the team wish him a speedy recovery,” the Kurukurus wrote.

The group stage of the FIFA Futsal World Cup takes place from September 12th to the 20th, with knockout stages starting on the 22nd and the final being played on the 3rd of October.

The Solomon Islands play their first match of the tournament on September 13th against Morocco.