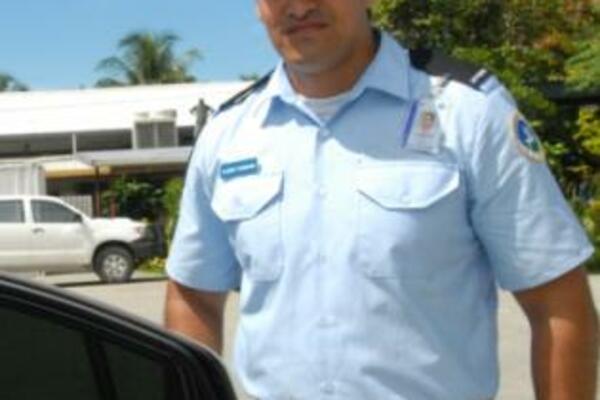 The contributions of the smaller Pacific Island nations such as Niue are greatly valued by the Regional Assistance Mission to Solomon Islands (RAMSI).

Albert Tasmania, currently on deployment with RAMSI, comes from Niue, a beautiful but isolated island located in the South Pacific Ocean, east of Tonga.

Believed to be the largest coral island in the world, Niue is also known as the Rock of Polynesia. Certainly Mr Tasmania has been providing rock-solid support to his counterparts in the Royal Solomon Islands Police Force (RSIPF) as well as his colleagues in RAMSI.

Today, Niue celebrates its Independence Day. Niue has been self-governing in free association with New Zealand since 1974.

Mr Tasmania commenced this, his first overseas deployment, in September 2008. One of two representatives of Niue, Albert lost his colleague and good friend Sisiliah Puleheloto in the Tongan boat tragedy in August this year.

"It was a terrible time for all of us in mission," said Mr Tasmania. "Sisi was a great police officer, and a wonderful person whom we continue to miss daily. She represented our country with pride and joy."

RAMSI Special Coordinator, Graeme Wilson, said the contributions of smaller nations such as Niue were greatly valued in the mission.

"When you realise that, by releasing two officers each year from its16-strong police force to work in RAMSI, Niue is actually contributing an eighth of its police to the Mission, the strength of Niue's commitment to RAMSI can be fully appreciated."

Mr Wilson said all members of RAMSI would join him in congratulating Niue on its 35th year of Independence.

"Niue, especially through the contribution of the much loved, late Sisiliah Puleheloto, has become very close to the hearts of many of us in RAMSI," Mr Wilson said.

For his part, Mr Tasmania's work with RAMSI has included postings to Gizo, Auki and Kira Kira. He has also performed general duties, and close personal protection for dignitaries, based in Honiara.

RAMSI's Participating Police Force Commander, Wayne Buchhorn, said Mr Tasmania was a credit to his nation, having contributed to the daily life of the Mission through his work and valuable support to members of the RSIPF and his Pacific Island colleagues in RAMSI.

"We are very grateful to have the smaller Pacific nations such as Niue so ably represented within the Participating Police Force," Commander Buchhorn said.

Back home in Niue's capital Alofi, Mr Tasmania, has worked in general duties and community policing as a senior constable for seven years.

He says he has enjoyed working in a more diverse environment in Solomon Islands as well as learning new skills, sharing knowledge and visiting different places.

Mr Tasmania does miss his family but enjoys interacting with new people. He also completed a scuba diving course earlier this year and has since enjoyed viewing the wrecks and reefs around the Solomon Islands.

"Deployment to RAMSI is a great experience," he says.