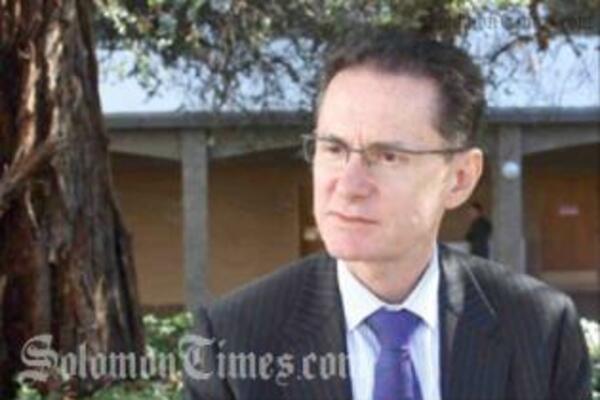 "Assistance with ongong development challenges was best provided by international donors, rather than RAMSI which was essentially a peacekeeping mission."
Source: 123people.com
Share
Wednesday, 05 December 2012 08:16 AM

The Special Coordinator of the Regional Assistance Mission to Solomon Islands (RAMSI), Nicholas Coppel says the time is right for RAMSI's transition in the country.

As a keynote speaker at the 8th International Lessons Learned Conference in Sydney, Australia, Mr Coppel said many aspects of Solomon Islands life had changed for the better over the past nine years, including the elimination of weapons, growth in the Solomon Islands economy and the rebuilding of the Royal Solomon Islands Police Force.

Mr Coppel told the audience of civilians, police and military personnel from around the world that RAMSI's transition didn't mean that all the problems facing Solomon Islands had been solved. Some challenges were ongoing, and would require commitment from the people and government of Solomon Islands.

"Assistance with ongong development challenges was best provided by international donors, rather than RAMSI which was essentially a peacekeeping mission."

Mr Coppel said the strength of state institutions would be a critical factor for Solomon Islands in the coming years.

"In the face of RAMSI's transition and drawdown the key question is not whether all the underlying causes have been addressed, but whether there are incentives to maintain peace and oppose the resumption of violence, and how robust the critical institutions of the state are, particularly the country's police force and justice sector."

Mr Coppel said while the RAMSI military contingent is expected to be withdrawn in the second half of 2013, RAMSI's Paticipating Police Force would remain to support the development of the Royal Solomon Islands Police Force for at least the next four years.

"The proposed withdrawal of the military will also help restore a positive image of the security outlook among overseas investors and visitors, and help restore self-confidence among Solomon Islanders."