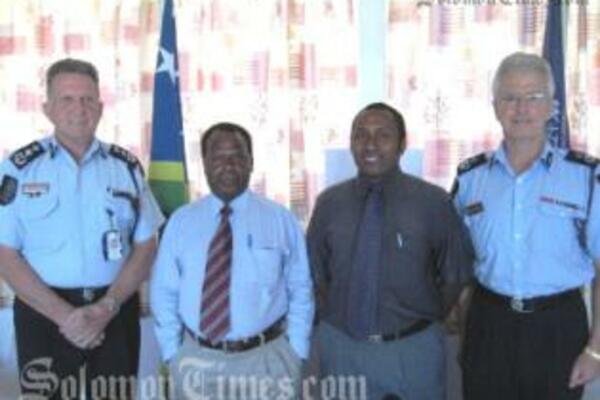 The Regional Assistance Mission to Solomon Islands (RAMSI) is to build 200 houses for the Royal Solomon Islands Police Force (RSIPF) over the next four years with funds granted in the latest Australian budget.

The Commander of RAMSI's Participating Police Force, Denis McDermott, announced the new SBD 104.5 million (AUD 20 million) project at Rove Police Headquarters today.
"I am pleased to be able to announce that Australia, through our partnership with the Solomon Islands Government and RAMSI, has committed AUD 5 million (SBD 26.12 million) every year for the next four years for the construction of 200 new houses for RSIPF officers and their families."

RSIPF educational and training opportunities have also received a major boost in the budget. Almost SBD 15 million has been committed to improving the numeracy and literacy levels of officers as well as other targeted training programs for the police.

Mr McDermott said he was particularly pleased that a solution had been found to RSIPF's housing problems before he completes his time as PPF Commander and Deputy Commissioner of the RSIPF next month.

"The state and standard of police housing in this country has, in my view, been a major barrier to further improvement in the development of the RSIPF."

"I have always said that in any police force in any country, anywhere, if you want officers who are committed and competent to make a career in the police force you must treat them with respect and provide them with certain minimum conditions of service.

"This initiative in conjunction with the New Zealand Government's Police Housing Project should go a long way to resolving this problem for the RSIPF," he said.

The New Zealand Government announced last year that it would build 34 new houses for police families to replace the current police barracks at Rove and other priority locations in the provinces.

"Together, these important measures over the next four years should improve morale and the wellbeing of the police force significantly," he said. "Provided the RSIPF work together, they should bring improvements in many vital areas," Mr McDermott said.

Providing adequate housing for police officers and their families across Solomon Islands is a high priority for the RSIPF he said.

"This funding gives the RSIPF immediate practical assistance in the recruitment, development and retention of quality police officers." Securing this funding is a testament to the leadership and commitment of Commander McDermott," he said.

"These initiatives will certainly have a positive impact on the lives of our officers and their ability to work together to better serve and protect the people of Solomon Islands.
Nearly SBD$15 million has been allocated in the Australian budget for improving the numeracy and literacy levels of RSIPF officers as well as other targeted training programs for the police.

Mr McDermott said the idea behind the numeracy and literacy training was to give officers, on a voluntary basis, the opportunity to improve their educational levels in order to access higher education opportunities.

Out of the SBD 15 million, SBD 9.71 million (AUD 1.86 million) has been allocated to fund a range of specialist police training in such areas as forensics, bomb technicians, maritime and communications.

Funding has also been provided for leadership development courses for police officers within the organisation, as well as undergraduate and postgraduate education opportunities to enhance the capability of future leaders in the RSIPF.

The funds for housing, training and education will be channeled through the Australian Federal Police who are responsible for funding RAMSI's Participating Police Force.