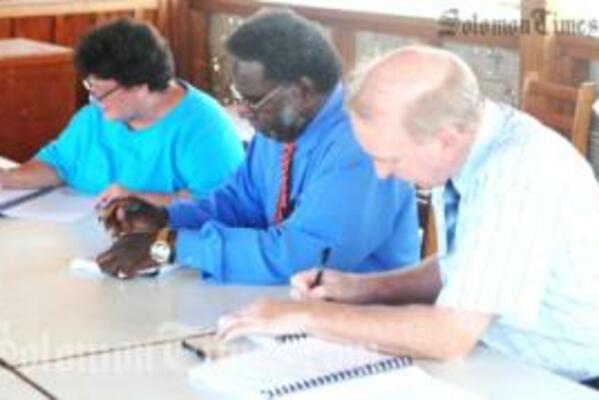 The Inland Revenue Division, the Solomon Islands Government agency that collects taxes and other revenue within the country, is to be supported for another five years by the Regional Assistance Mission.

This follows a decision by New Zealand Government to fund, through RAMSI, another package of assistance for the reform and strengthening of Inland Revenue that will last until 2013.

The New Zealand Government announced today that it is committing a further NZD $13.5 million (SBD $58.5M) to the next step of strengthening the Division which will focus on building existing capacity across the division, developing strong tax technical management and leadership skills and providing operational support.

There has been a massive increase in revenue collected by the division since RAMSI began working with Inland Revenue in 2003 to reform and strengthen its approach.

Minister for Finance and Treasury, Hon Snyder Rini, said the assistance would build on the hard work public servants and RAMSI advisers had been doing to improve the collection of government revenue since 2003.

"This has led to the Division gaining the confidence of tax payers and providing the government with increased revenue to pay for government services that benefit everyone."

An effective revenue collection agency is a cornerstone of democracy and goes to the heart of building a sovereign nation as it ensures that the benefits of the growth in the economy experienced over the last few years are passed on to all Solomon Islanders.

"The progress that has been made in the Inland Revenue Division should be a source of pride for the public servants working to improve revenue collection. The increased revenue has enabled the government to provide money to pay for a range of services - this is about Solomon Islanders helping Solomon Islanders improve their lives, Mr Wilson said."

"This longer term assistance recognizes those achievements, the relationships that have been built and the need for more focus on capacity building to make sure these changes continue, long after RAMSI is gone."

"The assistance recognises the importance of revenue reform to rebuilding and developing Solomon Islands for the benefit of all," Ms Panckhurst said.

"Increased revenue provides the Solomon Islands Government with the money to provide a functioning government and the delivery of services to its people."

The program was designed in close consultation with Inland Revenue Division and Ministry of Finance and Treasury.

Acting Commissioner of Inland Revenue and RAMSI adviser, Andrew Minto, said the program would provide more resources for capacity building and reflected the close and cooperative partnership between RAMSI and the Government.

"In the context of the current global economic crisis, it is critical that government continues to have a strong source of revenue to continue to provide government services."

Mr Minto said currently 30 per cent of his staff are undertaking part-time study, reflecting the focus on training and building skills.

"We also want to work more closely with the commercial sector and support business with the knowledge and information necessary to meet their tax obligations."

The Minister said the Government needed money to help people in rural areas and in Honiara, and a strong Division that had the confidence of people to collect and manage revenue was an important part of that process.