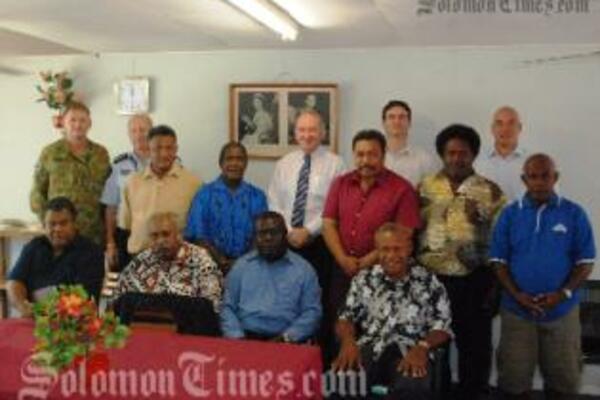 "This is an important meeting and we look forward to working together to help improve life for the citizens of Honiara," said Cr Mua.
Source: Photo Supplied
Share
Tuesday, 01 December 2009 07:27 AM

Representatives from RAMSI met today with Honiara City Council (HCC)'s executive group as part of the Mission's efforts to strengthen relationships with all levels of Government in Solomon Islands.

The meeting covered a range of topics, including law and order, unemployment, and the future direction of RAMSI, particularly in relation to the recently-agreed Solomon Islands Government-RAMSI Partnership Framework document.

RAMSI Special Coordinator Graeme Wilson congratulated the Council on its recent achievements, which include the implementation of an improved waste management program for much of the city, the establishment of a number of new medical clinics and the elimination of the Council's debt.

"The recent work by the Honiara City Council to improve the lives of the many thousands of residents of this city is to be congratulated," Mr Wilson said. "While there is still a great deal more to do, the increased pace of the work represents a very positive direction for the Solomon Islands capital."

Mr Wilson said that any work to improve life for the residents of Honiara required an approach that catered to the particular nature of the city.

"Honiara is the political, economic and cultural capital of Solomon Islands - and is home to a population that has come from many different provinces," said Mr Wilson. "Any work to improve living standards for those in this city requires careful consideration."

"Today's meeting is a positive step forward in the relationship between Honiara City Council and RAMSI."

Honiara Mayor, Cr Andrew Mua said that the achievements of RAMSI, particularly in the area of law and order, had helped restore the confidence of residents of the Solomon Islands capital, and that he looked forward to strengthening the relationship between the HCC and RAMSI.

"This is an important meeting and we look forward to working together to help improve life for the citizens of Honiara," said Cr Mua.

It is the first in what is expected to be an ongoing program of briefings between Honiara City Council and RAMSI, and follows an extensive program of visits that saw RAMSI Special Coordinator Graeme Wilson meet with the Premiers of each of Solomon Islands provincial governments over the course of the past nine months.