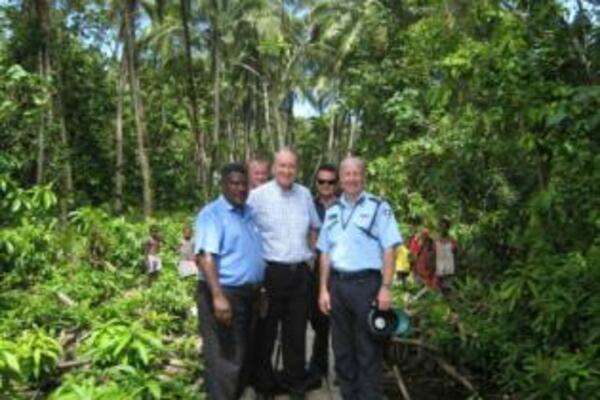 The comments came following a visit on Tuesday by Mr Wilson, together with Wayne Buchhorn, Commander of the Participating Police Force (PPF), to Makira-Ulawa Province as part of an ongoing program of meetings with provincial governments.

The pair met with the Provincial Premier, Hon. Thomas Weape and his executive team in the provincial capital, Kira Kira, to discuss key local issues including law and order, as well as projects being supported by RAMSI under the Provincial Government Strengthening Program.

Premier Weape welcomed the RAMSI contingent, noting that the high-level visit showed RAMSI's interest in listening to the concerns of the Government and people of Makira-Ulawa Province. He said the support provided by RAMSI had been crucial to the restoration of law and order in Solomon Islands.

"Since RAMSI's arrival in this country, peace has returned and people feel a greater sense of confidence in going about their everyday lives," Premier Weape said.

Mr Wilson commended the Provincial Premier for his efforts to improve local development, which was being seen through the recent commencement of works on a series of important projects - the installation of solar back-up power systems at the Provincial Government Offices and Kira Kira Hospital, and the purchase of two-way radios to improve communications in the province.

This program will support a number of other key investments in Makira-Ulawa Province during the current 2009-2010 financial year, including a water and sanitation project at two primary schools, high frequency (HF) radio installations at five nurse aid posts, repair and extension of classrooms at five primary schools, along with the Santa Ana fisheries project, which is set to provide a market outlet for local fishermen.

"The pace of progress in Makira-Ulawa has increased in the last 12 months, for which I extend my congratulations to the Premier and his team," said Mr Wilson. "I hope the trend continues as these investments into local infrastructure are important to the long-term future of the people of Makira-Ulawa."

Mr Wilson and Commander Buchhorn were also joined on their provincial visit by the Minister for Police, National Security and Correctional Services, Hon. James Tora, who hails from the Makira-Ulawa province. Minster Tora welcomed Mr Wilson and Commander Buchhorn to his village of Hunuta, on the island of Ugi, where he gave them a tour of the local area.

"I thank the Minister for welcoming us to his home village on Ugi," said Mr Wilson. "Few people get the opportunity to visit this beautiful part of Solomon Islands, and I thank the Minister and the people of Hunuta and surrounding villages for the warm and friendly reception they provided."