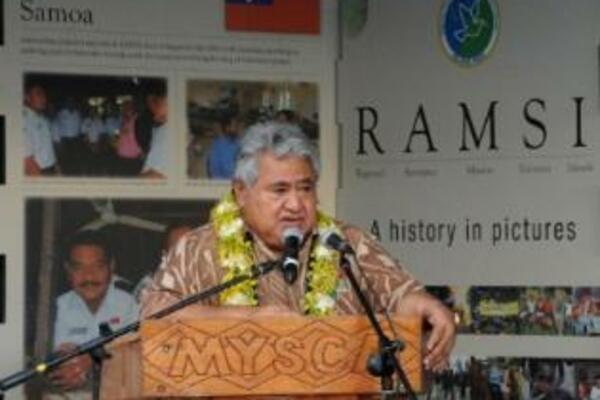 The exhibition was officially opened by Samoan Prime Minister, Tuilaepa Lupesoliai Sailele Malielegaoi, who said RAMSI was one of the Pacific region's biggest achievements, and one that he was proud S
Source: RAMSI Media
Share
Friday, 29 July 2011 10:41 AM

RAMSI: A history in pictures, a photographic exhibition that showcases the history and achievements of the Regional Assistance Mission to Solomon Islands (RAMSI), has opened in the Samoan capital, Apia.

The free exhibition will be on show at the Museum of Samoa until August 26, and features a wide range of spectacular images from across the Solomon Islands, including many from the initial period of weapons being surrendered, the arrest of key militants and profiles many of the Samoan police officers who have served with RAMSI since it began in 2003.

The exhibition was officially opened by Samoan Prime Minister, Tuilaepa Lupesoliai Sailele Malielegaoi, who said RAMSI was one of the Pacific region's biggest achievements, and one that he was proud Samoa had been a founding member.

"It is a matter of quiet pride that Samoa has been able to contribute to RAMSI with over 100 of our officers having served on the mission," said Prime Minister Tuilaepa.

"Over its history RAMSI has come up against numerous and serious challenges, as to be expected given not only was it new territory for Pacific Islands Forum countries, but also for the Forum itself," he said.

"The fact that RAMSI managed to overcome these challenges is testament to the strong commitment of Pacific Forum governments with the Solomon Islands, the immense resolve, hard work and sacrifice of the many people who have served in the Mission, together with the desire of Solomon Islanders themselves for RAMSI to bring stability to their community and to improve their lives."

Prime Minister Tuilaepa encouraged Samoans to view the exhibition, saying it was a great opportunity to learn more about the work that their fellow countrymen and women had been undertaking in Solomon Islands.

"[The exhibition] provides an opportunity for our people to see the work RAMSI is doing to help Solomon Islands and, very importantly, to understand the reasons behind the mission. And it is a demonstration of the importance of regional cooperation in resolving issues affecting the Pacific.

RAMSI Special Coordinator Nicholas Coppel said it was important to bring RAMSI: A history in pictures to Apia, as Samoans had been such an important part of RAMSI since the mission's deployment in July 2003.

"This exhibition aims to tell a story; a story of a region coming together to help a friend in need," Mr. Coppel said.


"From day one, the hard work and commitment by Samoan civilians and police has reflected Samoa's outstanding commitment to RAMSI and to the Solomons. I sincerely hope that you feel RAMSI: A history in pictures accurately reflects this commitment."

Speaking on behalf of the more than 100 Samoan police officers who have served with RAMSI since 2003, Assistant Commissioner of the Samoan Police Service, Lafaele Uili Seana, who, in July 2003, was one of the first Samoans to arrive in Solomon Islands and serve with RAMSI, said Samoans and police from other Pacific Island nations had been an integral part of the RAMSI mission from the outset.

"As soon as we arrived, we were working hand in hand with police officers from Solomon Islands and the other Pacific nations. ...It was a combined effort from the 15 countries, working with the local police," said Mr Uili.

He said that Samoan police officers had brought specialist skills to RAMSI which had been an important part of its continued success.