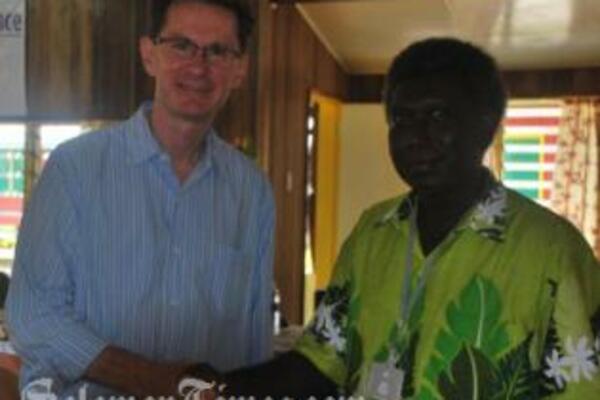 RAMSI wants to work closely with all levels of Solomon Islands society to make sure confidence is maintained throughout RAMSI's transition, the Special Coordinator, Nicholas Coppel said.

Addressing the last day of this year's Premiers Conference in Choiseul, Mr Coppel told the Premiers that it was important that everyone recognised RAMSI's transition as being a planned process of handing over.

"RAMSI is a partnership with the Solomon Islands Government, and it is important that we consult with as many leaders as possible at all levels of government and the community," Mr Coppel said.

"People have been talking about 2013 but what 2013 actually represents is the beginning of the next four-year cycle of Australian funding for RAMSI," he said.

It is true that different parts of RAMSI would transition to other donors including Australia and New Zealand at different times over the next few years however in some areas, such as support to the RSIPF, it was planned that RAMSI's support continue for some years to come.

"How we provide assistance has changed from that which was needed in a post-conflict situation to that which is appropriate to a long term development strategy," he said.

"In consultation with the RSIPF and the Minister for Police, National Security and Correctional Services, we have agreed to step back from everyday policing."

But it is still envisaged that in 2013 there will still be more than 150 members of RAMSI's Participating Police Force stationed in the country.

So far this year RAMSI has withdrawn from three provincial police posts: Buala, Isuna and Kirakira, and will withdraw from two more in the coming weeks. They are Lata and Tingoa.

Deputy Commissioner of the Royal Solomon Islands Police Force (RSIPF), Edmund Sikua said the RSIPF saw RAMSI's transition as an opportunity for the RSIPF to take back responsibility for maintaining the nation's law and order.

"We also see it as an opportunity for the community and the Provincial Governments to participate more fully in contributing to the country's peace and well being."

Addressing concerns raised by several premiers, Deputy Commissioner Sikua,
said the RSIPF were conscious of the need for Provincial Police Commanders and their officers to be properly resourced.

He said the RSIPF expected to purchase ten fast boats - at least one for each province - soon.

"Whatever we do in terms of equipment and assets for the provinces, we need to make sure it's sustainable and that the RSIPF can support and maintain these assets," he said.

This was why the RSIPF had not simply asked the PPF for all their assets in each of the provincial posts he said.

Solomon Islands Permanent Secretary responsible for RAMSI, Paul Tovua told the conference that transition should not just be looked at as challenge but as an opportunity for Solomon Islanders.

"Transition is an opportunity for Solomon Islanders, for the Government to take the lead in shaping the changes and planning a way forward," Mr Tovua said.