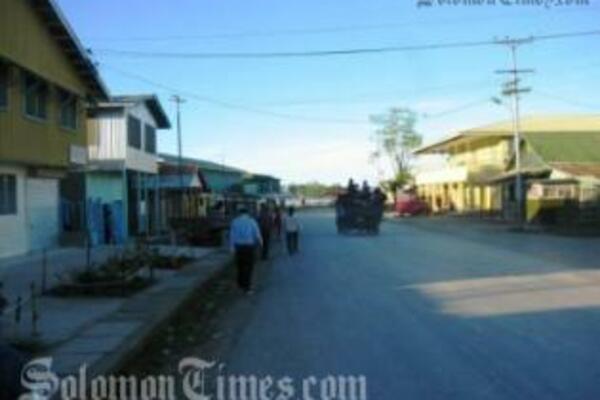 Auki town was where the RAMSI Chief met with Malaita Premier and more than twenty community leaders.
Source: griffith.edu.au
Share
Tuesday, 31 March 2009 09:08 AM

Mr Wilson led a team of seven to meet with the Premier and his executive before holding consultations with more than 20 community leaders.

The Premier, Richard Irosaea, thanked Mr Wilson for taking the time to make the visit and pledged his government's commitment to work closely with Mr Wilson during his tenure as Special Coordinator.

"We are very appreciative of what RAMSI has done to address the breakdown in law and order caused by the ethnic tensions," Mr Irosaea said at the outset of the meeting.

Mr Wilson explained that RAMSI's mandate was to work in partnership with the people and governments of Solomon Islands to build a better future for all Solomon Islanders.

"This is the mandate that RAMSI has been working under since we arrived in 2003 but there are still many challenges ahead," Mr Wilson said.

In the economic sphere, RAMSI provided advisers and other support aimed at building Solomon Islands prospects for broad-based economic growth.

"Over the past six years, measures introduced with RAMSI's help have led to a big increase in government revenue and improvements in financial and debt management but there is still much work to be done in terms of further economic reforms."

Mr Wilson said that while RAMSI had built roads and bridges in Malaita and some other provinces, the responsibility for most infrastructure assistance had now reverted to traditional aid donors who once again felt free to operate in Solomon Islands.

Among those accompanying Mr Wilson on his introductory visit were RAMSI's Participating Police Force Commander, Denis McDermott, the acting head of RAMSI's Law and Justice Program, Meg Johnson, as well as the RSIPF's deputy Police Commissioner, Walter Kola and the Commissioner of Corrections Services of Solomon Islands, Francis Haisoma.

Deputy Commissioners McDermott and Kola briefed both the Premier and the executive and a group of community leaders on plans to reintroduce community policing in a form similar to the old area constables.

Mr McDermott emphasized that policing was a shared responsibility between community leaders, their people and the police force.

Former Premier, Reuben Moli, described the issue of youth unemployment as a 'time bomb' waiting to go off.

Mr Wilson said he shared Mr Moli's concern about youth unemployment. He added that economic development was part of the solution but also urged community leaders to take increased responsibility for developing youth and finding ways to engage young people in productive activities.

Mr Wilson said he had found the visit very useful and informative. "Visits like this one highlight the challenges faced by the great majority of Solomon Islanders who are living in the provinces. I look forward to making similar visits to all other provinces in the months ahead," he said.