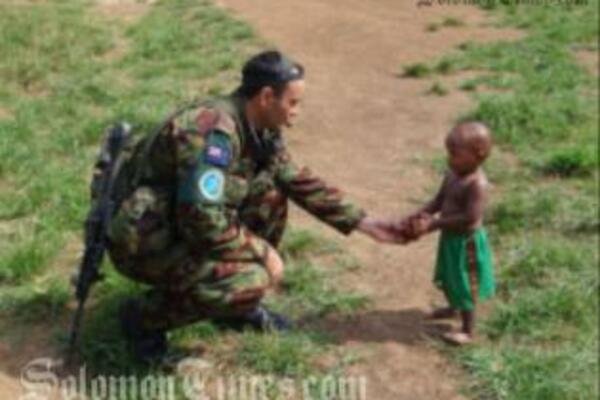 Nation building though sport and involvement in the community is the theme of this week's celebrations to mark six years of partnership between Solomon Islands and the Regional Assistance Mission.

RAMSI Special Coordinator, Graeme Wilson said he had chosen this theme because he believed that the contribution that RAMSI can make goes beyond helping to restore law and order and to revitalise government institutions.

"It goes to being part of the community and contributing to building a nation," Mr Wilson said during his opening speech at a special Island Night hosted by the mission at its headquarters on Saturday night to mark the occasion.

RAMSI personnel are actively involved in sporting and other community activities with the key focus on creating stronger partnerships throughout the country.

"They are also making the most of the sporting opportunities to become immersed in life here, with sports such as rugby, soccer, triathlon and netball providing another great avenue for the RAMSI team to contribute to the local community," he said.

The mission has also provided supplies and assisted communities in almost every province to organise RAMSI Community Fun Days to mark the 6th anniversary.

Mr Wilson said the anniversary also provided an ideal opportunity to reflect on the lessons learnt as well the achievements of the last six years.

"When you look back, the journey that RAMSI has shared with the Solomon Islands people and government over the past six years has been a remarkable one - and not without its ups and downs."

Mr Wilson said that this journey continues and many challenges remain.

"But we are getting to know each other better, confidence is building and the partnership is going from strength to strength," he said.

The Prime Minister thanked RAMSI for all the work that they have done in the last six years.

"I would like to on behalf of the Government and people of Solomon Islands to congratulate RAMSI on its sixth birthday," he said.

"I know the last six years have not been easy, they have been full of challenges but because of our partnership, which is strong and because we are committed to the mission we have set ourselves to achieve what have managed to overcome those challenges."

But he also said that he wanted to remind Solomon Islanders that they must not take things for granted.

"We know that RAMSI is not going to be here forever," he said.

"From this day onwards we must begin to, in the spirit of partnership, ensure that we are able to take on what our friends from the region...have been here for the last six years to show us, to teach us to go forward and ensure that our country can once again move forward in peace, in unity and in prosperity."