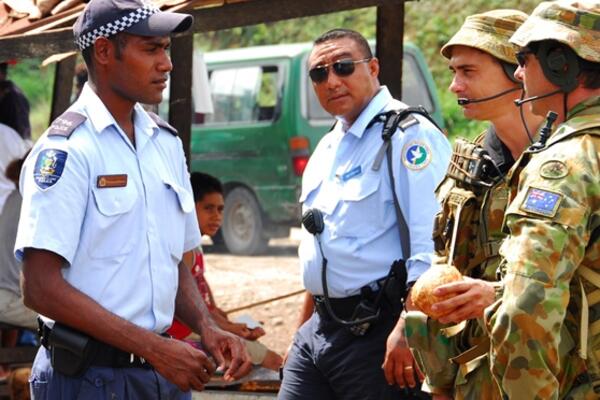 The RAMSI anniversary will not only showcase what has been achieved so far but it is also a time to help Solomon Islanders start discussing what they would like to see when the Mission actually leaves the country.
Source: aspistrategist.org.au
Share
Friday, 12 July 2013 08:05 AM

Arrangements are now well underway by the Solomon Islands Government, Pacific Islands Forum Secretariat (PIFS) and the Regional Assistance Mission to Solomon Islands (RAMSI) to mark the 10th anniversary of the Mission on 24 July 2013.

A National Organising Committee chaired by the Secretary to the Prime Minister, Barnabas Anga with membership drawn from various government departments and RAMSI has been working on a program for three days of activities and ceremonies from 23 – 25 July.

The Government has approved the theme: “Strengthening our nation and our region – 10 years of RAMSI- SIG Partnership” for the celebrations.

“This is a historical milestone for Solomon Islands as it marks 10 years of the intervention that returned law and order and security to its people after several years of internal strife. We want therefore to give our young people an opportunity to remember the success of the partnership with our region under RAMSI,” said Secretary to the Prime Minister, Mr Anga.

“For RAMSI the 10th anniversary is not only an opportunity to showcase what it has been able to achieve so far but it is also a time to help Solomon Islanders start discussing what they would like to see when the Mission actually leaves the country,” said RAMSI Special Coordinator, Nicholas Coppel.

Mr. Kauha also confirmed that as part of the program leading up to the three-day celebrations, the National Organising Committee is organising a series of radio programs, a radio talk back show, a march from Honiara City Council to the Art Gallery, a speech contest, an essay writing competition and a quiz program on topics related to RAMSI.

The main highlights of the anniversary will be the official welcome at Lawson Tama on July 24 when the general public will witness the arrival of the Pacific Islands Leaders, with a key note address to be delivered by the Prime Minister Hon. Gordon Darcy Lilo to be followed with a gift presentation ceremony for the visiting regional leaders.

The leaders will also have an opportunity to share and discuss RAMSI in a closed session meeting before making a historical visit to the RAMSI Headquarters at GBR to enable the leaders to see where RAMSI has been operating from over the past 10 years.”

The National Organising Committee will also host public programs at the National Art Gallery where cultural performances, local bands and information sessions to engage the general public on this historical occasion.

Mr Kauha further confirmed that nine countries and five Prime Ministers have confirmed their attendance and this number is likely to increase in the next couple of days.

All Pacific Islands Forum Leaders have been invited to the three-day anniversary celebrations.