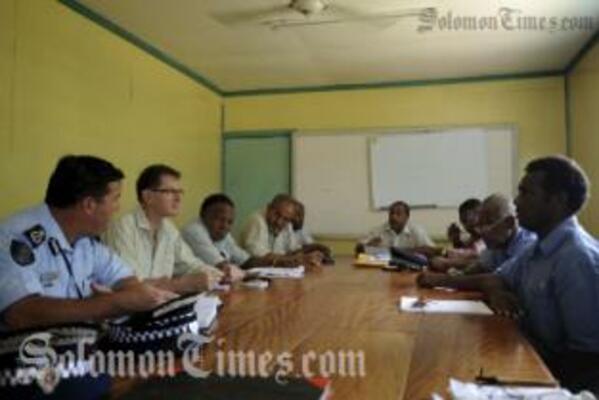 The group, including RAMSI Special Coordinator, Nicholas Coppel, Commander of the RAMSI Participating Police Force, Paul Osborne and Solomon Islands Permanent Secretary for RAMSI, Paul Tovua, met with Mr Weape and the Provincial Executive to discuss the plans for RAMSI's transition, including the withdrawal of RAMSI Participating Police Force (PPF) advisers from the capital, Kirakira.

Premier Weape said his Provincial Government was very supportive of the transition process, as it would provide the RSIPF with greater opportunity to take the lead in policing Makira-Ulawa.

"The Government and people of Makira appreciate the work of RAMSI. This transition of the two PPF advisers that are here is a good thing, as it indicates we need to work now to enhance the capacity of our police, and we need to help them develop their skills."

Mr Weape said RAMSI's transition was an important step in building confidence in the community.

"We appreciate the arrangements that will gear up and enhance our police, so that the confidence of our people is maintained in the future."

"RAMSI has been here for eight years now, and this transition is an opportunity for us. It means we can take the lead, and can work with other long-term donors to shape how best we can build our confidence."

Mr Tovua's comments were echoed by RAMSI Special Coordinator, Nicholas Coppel, who said the process of transition was the natural next stage for RAMSI's work in Solomon Islands.

"Transition does not mean an exit. RAMSI will be here for some time, and there will continue to be strong RAMSI support to the RSIPF in Makira," Mr Coppel said. "This is a change in the way we are doing things, and is about allowing the RSIPF to step forward to take on greater responsibility."

Commander of the RAMSI Participating Police Force, Paul Osborne said RAMSI's two PPF officers currently stationed in Kirakira, are expected to withdraw by the end of October. RAMSI's support to Makira-Ulawa Province will continue, however, with a range of mentoring/training programs for RSIPF officers set to be undertaken in the coming months, along with a number of planned infrastructure upgrades to police facilities in the province.

"The decision to withdraw from Kirakira has been undertaken in complete consultation and agreement with the RSIPF," Mr Osborne said. "This is about the continual development of the police in Makira, and is a reflection on the strong work of RSIPF officers throughout the Province."