RAMSI and Government Hold Talks in Visit to Temotu 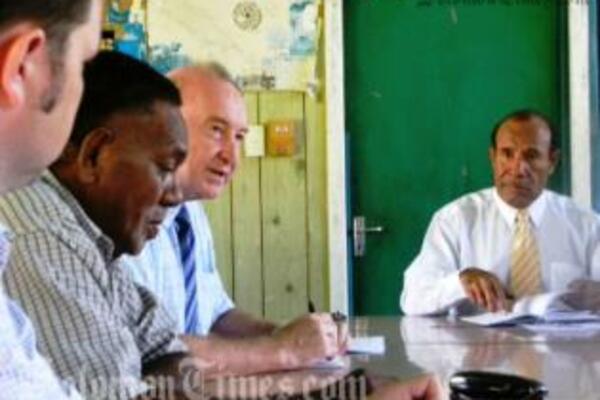 RAMSI's Special Coordinator, Graeme Wilson and the Permanent Secretary with responsibility for RAMSI, Paul Tovua, led a delegation to Temotu Province this week.

They were accompanied by RAMSI Deputy Development Coordinator, James Hall. Mr Wilson and Mr Tovua met with Premier Edward Daiwo and eight of his Executive Officers at Temotu's Provincial Headquarters.

Topics discussed included the Partnership Framework between RAMSI and the Solomon Islands Government, RAMSI's focus on combating corruption and efforts to strengthen the justice system in the provinces.

Premier Daiwo said he appreciated the visit by Mr Wilson and his delegation. He thanked RAMSI for the funds it had provided through the Provincial Governance Support Program.

"The funds are supporting the rehabilitation of the Luusalemba Provincial Secondary School and the renovation of several staff houses in the provincial capital, Lata", he said.

Mr Wilson explained how it was hoped RAMSI's efforts to strengthen national institutions and promote reforms would benefit the provinces.

He referred to the technical and legal support RAMSI had provided the Solomon Islands Government in relation to the new Telecommunications Act.

"Reform in this area will make telecommunications less expensive and more accessible for people in the provinces, and RAMSI has been proud to play its part in supporting the Solomon Islands Government in this reform process", Mr Wilson said.

Mr Wilson said he was very happy that with this week's visit to Temotu, he had now visited every province in Solomon Islands. Mr Wilson took up the post of Special Coordinator in January this year.