RAMSI Acts within the Law: Coppel 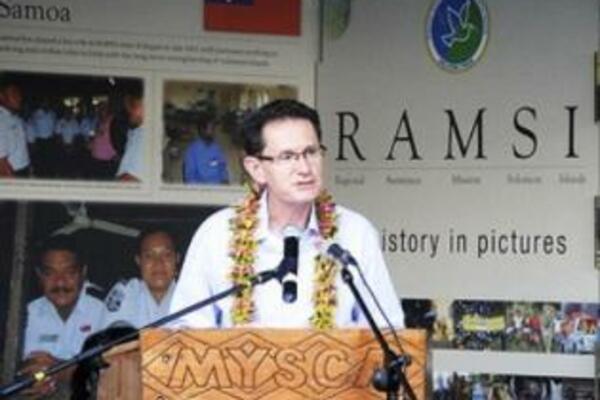 "RAMSI has always supported the RSIPF to protect the property and life of everybody in Solomon Islands", he said.
Source: STO Archives
Share
Friday, 21 October 2011 08:47 AM

RAMSI is confident that it has always acted in good faith and in accordance with the laws and constitution of Solomon Islands, RAMSI Special Coordinator Nicholas Coppel said.

Mr Coppel was responding to an article which appeared on the front page of the Solomon Star newspaper.

RAMSI also firmly rejects any suggestion that it has ever stood back and allowed violence to occur, Mr Coppel said.

"RAMSI has always supported the RSIPF to protect the property and life of everybody in Solomon Islands", he said.

As the matter is currently before the Courts, Mr Coppel said the Mission would not be making any further comment.

Meanwhile, the RAMSI Special Coordinator has clarified that the regional mission's transition period does not necessarily mean RAMSI leaving.

Mr Coppel said some people wrongly portray the transition period as the time when RAMSI will leave.

However, Mr Coppel said the transition would apply differently for the civilian, police and military components of RAMSI.

He said some of RAMSI's activities could change but only in terms of its delivery mode.