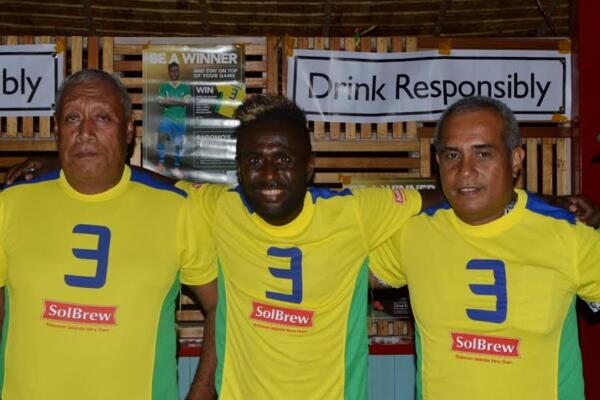 Setting foot in Gizo for the first time in 18 years, Solomon Breweries’ Drink Responsibly Ambassador Elliot Ragomo arrived to a crowd of supporters at the Gizo seafront, amongst them kids excited to see their Futsal hero. Elliot Ragomo was in Gizo over the weekend to talk Drinking Responsibly and Futsal.

Speaking to invited guests at the PT109, Kurukuru Captain Elliot Ragomo introduced the Drink Responsibly campaign sponsored by the Solomon Breweries Ltd, as an initiative to help, especially young people, understand that the current style of drinking alcohol excessively is not the right way.

Elliot highlighted how abuse of alcohol can permanently stop youths from achieving their career or goals in life, as he has seen from his own personal experience. He explained that drinking responsibly is about knowing your limit and managing how you drink.

Elliot also talked about his experience at the FIFA Futsal World Cup and took that opportunity to thank all his supporters throughout the country. He also expressed his gratitude to Solomon Breweries for giving him the opportunity to advocate responsible drinking as well as promote the sport he loves, Futsal.

Speaker of the Western Province Assembly, Mr Richard Tekipono also spoke at the event he highlighted the increase of health issues due to over consumption of alcohol. He emphasized that people standardising how they drink is the way best to control their drinking, and that the Drink Responsibly campaign raises awareness in exactly that.

Representing the Royal Solomon Island Police Force, Provincial Police Commander (PPC) for Gizo, Mr Vincent Eria said that the majority of the crimes in Gizo were alcohol related. He said the Drink Responsibly program will help with communities and police reach some common understanding on how to control alcohol issues in the community.

Mr Eria also expressed his appreciation for what Solomon Breweries Ltd has initiated and congratulated Elliot Ragomo on his bold step to be an advocate for Drinking Responsibly.

Venue host Mr Laurie Wickham in his remarks highlighted the impact excessive drinking can have on personal finances. He explained that when people are buying and drinking alcohol beyond their level of income it impacts heavily on their families.

Mr Wickham stressed that it is for issues like this why drinking responsibly should be a cornerstone for personal and community security as it is about controlling when, where and how you drink. He thanked Elliot Ragomo and Solomon Breweries Ltd for establishing the drink responsibly campaign.