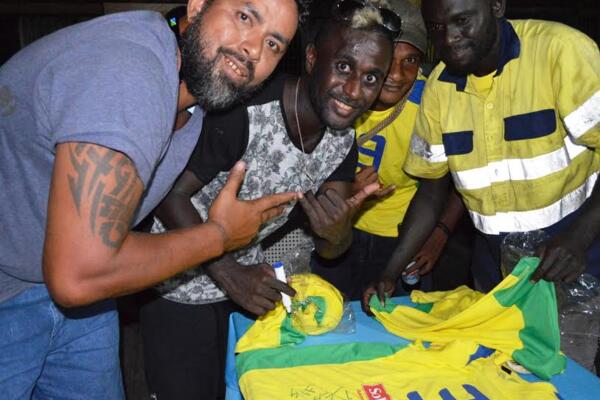 Elliot Ragomo took time out during his recent trip to his home province (Western Province) to host with Solomon Breweries Reps a Drink Responsibly talk in Munda.

The limited number of guests invited included local community leaders from Munda and surrounding villages, representives from the Police (RSIPF) and local youths.

For Elliot Ragomo this was the first time to for him to stand and speak in his own community. He spoke of his personal experience with alcohol and what it took to get back to being a competitive sportsman able to return to the world stage again representing his country.

Speaking in Roviana, his mother tongue, Elliot explained that he used to have drinking sessions that at times would go for days but he soon realised that he had to stop and control it if he wanted to pursue his passion, futsal.

He went on to encourage guests to know their limit and to be mindful of how they drink especially if they are interested in sports.

Also speaking during the event was the Chair of Dunde Council of Elders, Senda Siosi and Sergant Pulekera of the RSIPF. Mr Siosi in his remarks said that the Drink Responsibly campaign and the talk was very welcome but expresssed that it would be good to include more youths and schools in future.

Sergant Pulekera in his remarks said while police data showed that alcohol related crimes in Munda were low he still wanted to hightlight the message of alcohol and safety. He called on, particularly the youth, to be aware of safety when out drinking and getting home but most of all the safety and well being of their family in their homes.

During the event guests also had the chance to ask about Elliot’s world cup experiences and get an autographed Drink Responsibly sports shirt from Elliot.