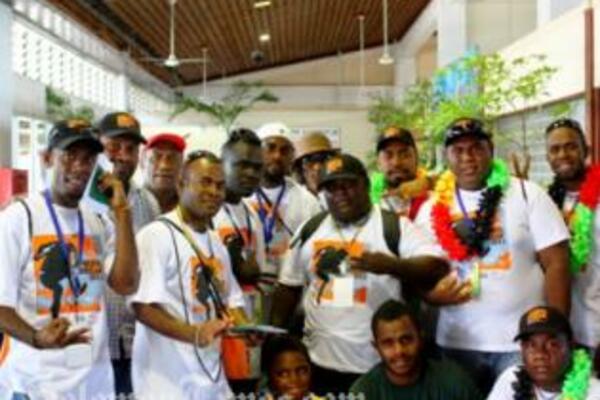 The opportunity for Pacific musicians to share and display their musical talent has returned.

Pacific Break 2011 is now officially open with entries being showcased online at
www.radioaustralia.net.au/pacificbreak and across Radio Australia's network of Pacific FM frequencies.

Over the past three years Pacific Break has uncovered some amazing musical talent from Palau to the Cook Islands in the quest to discover the best unsigned original musicians the Pacific has to offer.

Last year's winners were III Kings from the Solomon Islands. Lead singer Chris Andris said, "Winning Radio Australia's Pacific Break last year was the best thing that ever happened to us. It was a great experience and we made our country very proud."

III Kings' heavy bass reggae track 'You Alone Me Magnify' was the stand out entry from Pacific Break 2010, along with other highly regarded entries such as Fiji's uniquely talented Milkshake with 'Channel 1', Solomon Islands artist Deskem with his song 'Work Done My Fren' and PNG's ever-talented Sam Clark with 'Here We Go Again'.

This year, Radio Australia maintains its partnership with Fest'Napuan in Vanuatu, ensuring that the winner has the opportunity to perform in a key spot at the annual 4-day pan-Pacific music festival in November.

"Once again we're delighted to host the winner of Radio Australia's Pacific Break," says Ralph Regenvanu, head of the Fest'Napuan organizing committee. "Over the past three years, the Pacific Break winners have been a real highlight of the festival."

If you live in the Pacific and are an unsigned, unpublished musician, you can submit your best original song for inclusion into this year's Pacific Break competition online at: www.radioaustralia.net.au/pacificbreak.

Entry forms are also available from the Australian High Commission, which is proud to continue working with Radio Australia to support the success of Pacific Break in Solomon Islands.