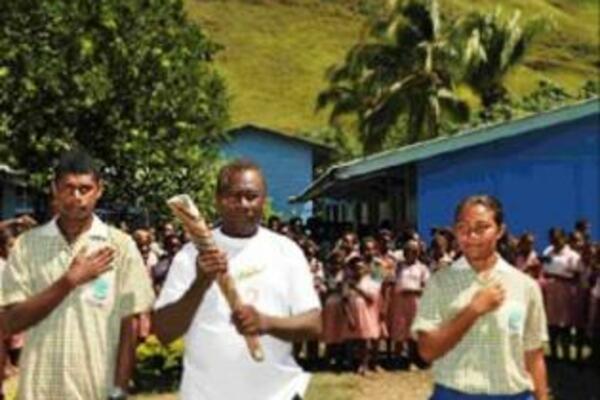 Hundreds of excited young children came out to see the Queen's Baton Relay as it makes its rounds in Honiara.

The much anticipated visit of the Queen's Baton Relay 2010 Delhi saw cultural performances by students in various schools.

Early in the day, the relay commenced from the Governor General's residence with the president of the cycling association, Mr. Leban Lokata, becoming the first Baton bearer of the day. He, along with three other cyclists, relayed the baton across various schools located at Honiara.

The students performed various cultural activities celebrating the arrival of the Baton to their schools. Performances varied from singing of the National anthem to the traditional Tamure dance by schoolgirls, with the boys acting as the warriors.

The journey for the day called the 'school voyage of East Honiara,' ended with a relay by the athletes and industry leaders of Solomon Islands. Mr. Fred Maetoloa, President of NOCSI and Mr. Tapasu Ming Leung Wai were amongst the other important dignitaries to have attended the Queen's Baton Relay 2010 Delhi.