Quarantine Rules May Have Been Broken: Wale 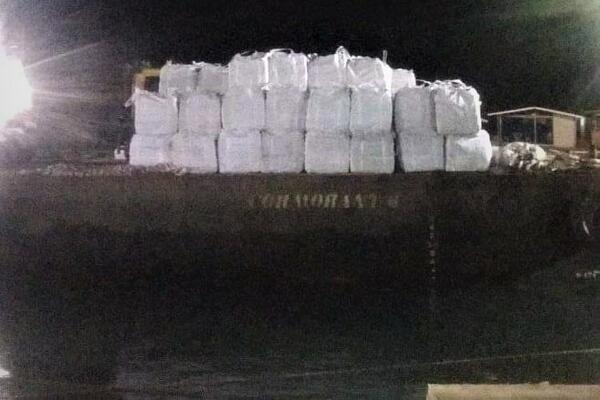 The cargo onboard the MV Worship Light being offloaded at a private wharf at Ranandi.
Source: FB: Yumi Toktok Forum
Share
Friday, 01 May 2020 07:20 AM

The Leader of Opposition, Hon. Matthew Wale calls on the government to explain the real situation with the Chinese vessel that came into the country last week.

This call came after it was reported that a Chinese vessel, the MV Worship Light entered Solomon Islands last week and delivered cargo brought in from China under suspicious circumstances.

The vessel was said to have carried, amongst others, a consignment of medical equipment required for the country’s Covid-19 preparedness activities. It spent four days in Honiara and travelled to two other local destinations before returning to China.

According to information at hand, both SIPA and SIMSA banned the vessel from entering for failure to comply with maritime requirements, standards and procedures. Despite this ban, the vessel was still allowed to enter and berth at a private wharf at Ranadi.

This raises a lot of questions of public interest and concerns.

The Opposition group says that it appears our international maritime obligations and domestic laws have been broken. Not only was the order by the responsible authorities disobeyed, the vessel was even allowed to berth at a private wharf not controlled by SIPA, and not in the approved wharfs, as per the quarantine requirements.

“Information at hand also reveal that the vessel’s berthing at the privately owned jetty, was done without SIPA and marine officers’ involvement, and one wonders how the berthing and offloading activities were handled.

“Both international and domestic maritime laws apply systems compatible with those of other countries and in times like these, it is of paramount importance that these systems are adhered are not comprised. Failure to do so can mean, blacklisting of Solomon Islands, something we do not want to happen in our preparedness plans. The decision taken to allow the vessel to enter does not make sense so I question the government on the rationale of this decision and any ramifications expected,” the Opposition Leader said in a prepared statement.

He says information received also suggests that the vessel did not undergo the 14 day quarantine period set for foreigners or travelers entering the country in the emergency period.

Wale added that, “it is clear that this vessel came to the Solomon Islands from China and that it spent less than the required days in Honiara. This too appears to be contrary to the quarantine period of 14 days for foreigners entering the country. Again this also casts serious doubts on the government’s seriousness in enforcing the emergency regulations to safeguard the interest of our people”.

The opposition group is concerned that given we are still to register a confirmed Covid-19 case, it is incumbent on the government to do everything necessary to prevent the virus from entering our country. While there is so much talk on the beefing up of manpower at the borders to monitor movement of people, this vessel’s questionable entry may have just undermined all these excellent efforts. It also appears as though, this is not an isolated incident. There may have been other similar trips in the recent past.

While medical equipment is important in our preparedness plans and activities, it is no excuse for allowing a vessel coming from China with Chinese crew to enter the country unchecked.

Hon. Wale questions the government on how this vessel was allowed to break the emergency quarantine requirements and, whether both crew and cargo were properly inspected on arrival, and what the outcomes of such inspections were.

The opposition leader called on the government to ‘clarify the circumstances surrounding the vessel’s trip. The public are entitled to know, the legal authority upon which the vessel was allowed to enter and off load cargo without the responsible authorities, and any steps taken to ensure that the crew and cargo were properly checked before unloading’.

The opposition group accepts that the state of emergency is currently in place. But this situation does not mean our laws and established protocols on border entry and shipping laws should be relaxed. In fact, the opposite should happen they should be made more stringent, given the situation we are in. That the covid 19 is an imported virus, the sealing of the borders and strict quarantine measures should be our priority.