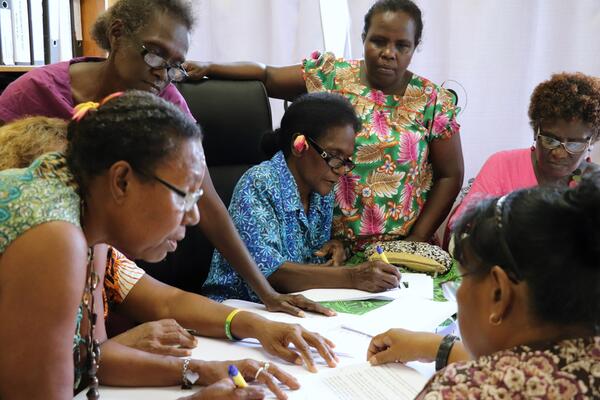 The list of things women shouldn’t do according to Solomon Islands’ culture is long: no wearing shorts, no lingering eye contact with men, no sitting near your brothers and no speaking up, among them.

The rules are nuanced and vary by province and tribe. But overall, cultural predispositions across the country leave women without the same level of respect and representation as men.

Even in Guadalcanal and Western Province, which have matrilineal systems that traditionally govern land inheritance and decision-making, women are largely absent from present-day leadership. According to Nanette Panda, the male face of political representation sidelines women’s issues.

“All needs of the people, both male and female, that you advocate on behalf of have to be considered,” she said. “Most of the discussions that have happened on the executive level or in the assembly lack views and inputs that can be made by women.”

As a Provincial Women’s Caucus member in Western Province, she’s trying to change that.

“Some of the interests are sensitive, and they are overlooked in a male-dominated assembly,” she said. “We look at them from the eyes of the women.”

Women in the house
The Pacific region has the lowest number of women parliamentarians in the world. In Solomon Islands, one Member of Parliament out of 50 is a woman, and a total of four women have served as MPs in the history of the country.
Across the nine provincial governments, only four women are elected assembly members. Women’s caucuses are a conduit for increasing women’s representation in provincial affairs.

The women’s caucuses in Western, Guadalcanal and Malaita provinces were launched in November 2018 with support from UN Women and the United Nations Development Programme (UNDP) through the joint United Nations Peacebuilding Fund (UNPBF) project and in partnership with the Ministry of Women, Youth, Children and Family Affairs.

They oversee implementation of provincial women’s policies and promote women’s political participation. By monitoring conflict situations, the caucuses prevent violence and increase women’s security. Their role also extends to consulting with the provincial premier and executive and advising on provincial reconciliation workshops.

The 22 caucus members have different backgrounds but are connected by the common thread of their tireless work for women.

After the caucuses were launched, UN Women found that members needed more knowledge to translate women’s concerns into policy positions and effectively champion gender equality at the provincial level. UN Women through the UNPBF project aimed to fill the gap with an intensive capacity building training in February on gender and advocacy.

Progress in the provinces
The women’s caucuses are making serious headway in amplifying women’s voices and elevating their interests, which include Temporary Special Measures and women’s savings clubs.

The Western Province Provincial Executive has formally endorsed its Provincial Women’s Caucus. And it went even further by appointing three caucus members, including Nanette, to the Provincial Assembly advisory group.

The caucus is now preparing a position paper to follow up on Provincial Secretary Jeffery Wickham’s commitment to allocate 20 percent of the total 2018-2019 budget to women’s development.
“I think the government feels that if this province needs to move forward, it must take on board the proposals of women development partners and players,” he said at the launch of the provincial women’s policy last year.

The women’s caucuses from Guadalcanal and Malaita are working with their minister of women’s affairs to get the same recognition from their provincial executive.

On to equality
The three caucuses are a pilot initiative developed through the UNPBF project, and if they prove effective, the model of bringing women to the provincial table can be replicated in other provinces. Sustaining peace and moving Solomon Islands beyond its Human Development Index ranking of 152 depends on engaging the female half of the population.

“Women have a right to decision-making in the province — not only men — especially in terms of matters like land,” Mary Kesty, a member of the Malaita Provincial Women’s Caucus, said.
Stifling gender roles and expectations have to be countered so that women can take their place, she said.

"We should determine what is good, and we should keep it. Then what we should leave out shouldn’t be brought back and taught to the kids,” Mary stressed.

She said with long strides and small steps, her province can adjust the male-only lens on political leadership.

“It can change,” Mary said of Malaita’s culture. “Even if it’s strong, it will change.”

The UNPBF is currently supporting more than 120 projects in 25 countries, including Solomon Islands’ project to ensure peaceful and inclusive transition from recent conflict. Since its creation at the end of 2015, the UNPBF has allocated US$623 million to 33 countries to help prevent relapse into conflict and to sustain peace.