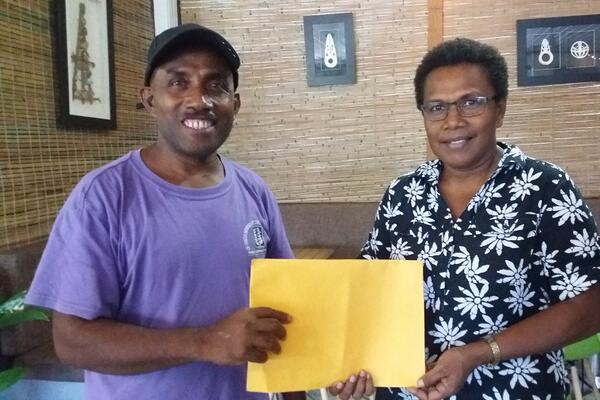 One of the event’s organizers James Kana and Lorio Sisiolo from FSC.
Source: Jimmy Nolan
By Jimmy Nolan
Share
Monday, 04 May 2020 10:01 AM

It's about hitting two birds with one stone, or in this case, two worthy cause with one small gesture.

One of the event’s organizers, James Kana said the idea to host the 25 push up challenge is to raise awareness on mental health as well as raise funds to support the Family Support Center (FSC).

He said a lot of push up challenges were seen on social media platforms with participants hoping to raise awareness on Post Traumatic Stress Disorder (PTSD) which is a mental health issue.

Kana said their group decided to extend this challenge further by raising funds which will help support counseling services at the FSC. At the event, participants were challenged to pay a sum of money to do 25 pushups.

Some that were not able to do the challenge were given the option to donate money towards this cause - a total of SBD$800 was raised and handed over to the FSC.

Speaking during the event, Lorio Sisiolo from FSC says violence against women have risen.

Sisiolo says they have also received an increased number of phone calls, so they are now mostly in operations seven days a week.

“‘During weekend and after hours we divert the phone calls to our main line. We have officers on duty particularly over the weekends”, Sisiolo says.

She said support from government has slightly dropped and most of their support now comes from donors and partners.

“We thank our partner donors for the support which enable our staff to carry out their duties, especially in carrying our awareness in the provinces”, she said.

At the same time, James Kana thanked those who participated in the 25 push up challenge at the Lime Lounge to raise funds and awareness on mental health. He also thanked the management of Lime Lounge to allow the space for them to carry out this challenge.

Post Traumatic Stress Disorder is a mental health condition that's triggered by a terrifying event — either by experiencing or witnessing it.

Symptoms may include flashbacks, nightmares and severe anxiety, as well as uncontrollable thoughts about the event.

Most people who go through traumatic events may have temporary difficulty adjusting and coping, but with time and good self-care, they usually get better.