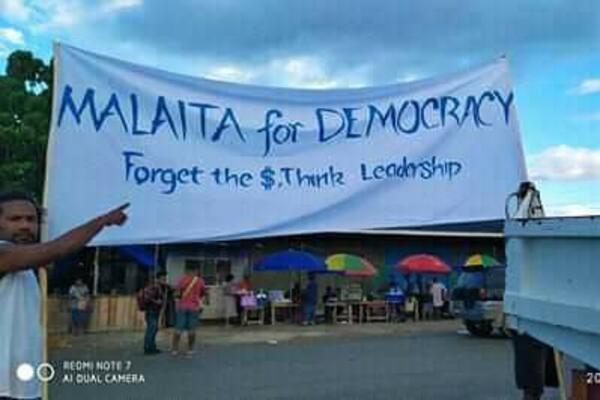 People in Auki are protesting the decision by the government to switch it's allegiance to China.

Reports from Auki say a peaceful protest is underway in the provincial capital, with many accusing the government of ignoring the wishes of the people.

"We do not want a switch because we know it was done for the wrong reasons," stated one protestor.

"Government must come out clear and tell us why they decide to switch, we know money is involved and so we must speak up," said Eddie, a 29 year old bus driver in Auki.

Police in Auki say that the protest has been peaceful, and will continue to monitor the situation.

"Yes it has been a very peaceful protest and we are happy at the way they have conducted themselves, we encourage them to keep it this way," one of the officers stationed in Auki stated in a brief conversation.

Meanwhile Police in Honiara say that they respect the right for people to protest, but it must be done peacefully.

Police say that while it is everyone's right to protest there are elements in "our community that take advantage of such situation."

Police calls for calm as public disagreement builds over the decision to switch alliegence to China.

Meanwhile, the Taiwan embassy has confirmed that after 36 years it will lower it's flag for the last time at 11.30am today.