Protecting Forests to Transform the Future 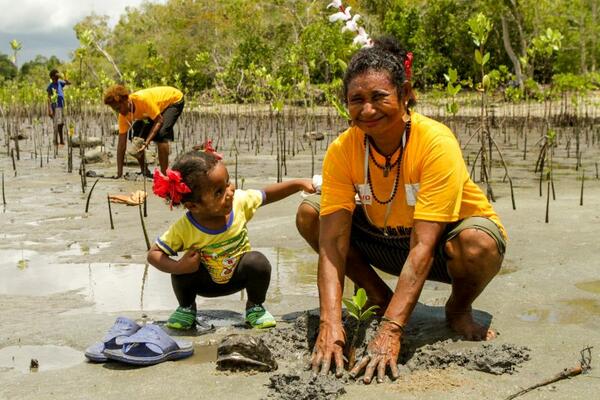 Had it not been for the women of the Roro tribe, things might look bleaker in their lush corner of Papua New Guinea.

Set upon by companies unsustainably extracting the fish and timber that provide the indigenous group’s livelihoods and food security, the Roro saw an already difficult existence becoming harder.

On this Pacific island where communities rely directly on nature for their survival, women are traditionally marginalized — as they disproportionally face the burdens of subsistence living and a changing climate. Today, though, the Roro are thriving, thanks to a group of women who fought to protect their natural resources — and gained unprecedented respect and empowerment in the process.

In honor of International Women’s Day, here is their story.

In the Roro tribe, women are responsible for childcare and harvesting food from gardens and the nearby mangrove forest, a critical source of income for the tribe and the envy of nearby villages thanks to its bounty of seafood, wood and other resources. The women navigate the dense, muddy tangle of trees to gather mud crabs and kina shells (a type of clam) to sell. Historically, that meant traveling to the market in Port Moresby, a seven-hour trip by car, often spending days away from their families. While at the market, the women fell prey to theft, crime and violence.

But as the mangrove forests were decimated by logging and mining, the women were left with fewer mud crabs and kina shells to sell — and less money to support their families.

Adding to their hardship: Women in the Roro tribe, as in many places in Papua New Guinea, could not participate in decisions that affected their livelihoods. Only the male chiefs could make decisions on behalf of the villages and the tribe, with no input from women.

“Women would spend three to five days at the market, get pennies for their resources then come back,” said Whitney J A Yadao-Evans, who was involved in the project and leads Conservation International’s gender work in Asia-Pacific. “The profits were so low that it wasn’t really worth it for the women, and the community was very poor as a result.”

That’s where a project led by The Papua New Guinea Center for Locally Managed Areas and mentored by Conservation International came in. It aimed to not only solve this struggle for fair income in exchange for natural resources, but to encourage a transformation of traditional gender roles. This approach was the first of its kind, explained Yadao-Evans, and its success could pave the way for further gender empowerment in Papua New Guinea.

How do you tackle something as monumental as empowering women? You start with a conversation.

The project, which took place in three villages, Nikura, Poukama and Delena, opened a discourse within the tribe about the value of women’s contributions. This dialogue was centered on respect for traditional customs, to which Yadao-Evans credits the program’s success.

“We knew that villages in this tribe were struggling with income and gender inequality, but we also understood that we had to approach it in a different way than other organizations have in the past,” Yadao-Evans said. “By drawing on traditional practices and approaching the gender gap that way, we were able to earn the respect for the women and enact real change.”

Through a partnership with a seafood exporter, women sell mud crabs, harvested from the mangroves, for three times the amount they were earning before the project. Because they can sell all of their harvest at once to one company, they now only have to leave their tribe for two days at a time and are no longer exposed to the violence at the public market.

As the women’s earnings grew, so did their worth to the community in the eyes of the chiefs.

At the same time, the project educated the tribe on the sustainable management of mud crabs and other species found in the mangrove forests, increasing the resources available to the women to sell, further improving the income level. This knowledge, coupled with increased income availability, has led to the tribe cutting off permissions to logging and mining companies, which offers increased protections for the mangrove forests.

Ultimately, the women were able to earn more income and have safer working conditions — and earn the respect of chiefs in the tribe. “Now, during community meetings,” explained Yadao-Evans, “women are able to stand alongside male chiefs and voice their opinions on tribal issues. This is a remarkable shift.”

Today, women are earning fair wages, which brings more money into the community. As a result, they can afford more food and supplies for their families, including medicine, school supplies and improving the security of their homes. The success of the project has demonstrated to the village chiefs the women’s value as contributing members of the tribe.

“Women now not only have a voice, but they are driving the conservation and management of mangroves,” Yadao-Evans said. “The success of this project after only 18 months makes it a great candidate for country-wide approaches to solving gender and income inequalities.”

The Roro are taking aggressive steps to protect and manage their mangroves and other natural resources, including creating sustainably managed areas with recognized legal protections. Now when women harvest mud crabs and kina shells, up to 25 percent are put back into a management area, increasing their population and increasing resource availability for the future.

Women have also organized groups within their villages to restock and replant mangroves in degraded areas to ensure the forest — and its bounty — can support the Roro for generations to come. Meanwhile, men in the communities are starting to take part in what were traditionally women’s tasks, including watching the children while women attend trainings on how to manage and restore the mangrove forests.

“Women are now in a position to not only provide for their families, but to hold power and to enact change in their communities,” Yadao-Evans said. “The shift that has taken place as a result of this project is revolutionary; by embracing their traditional values in our approach to empowering women, we were able to do what many organizations have been trying to accomplish for decades.”