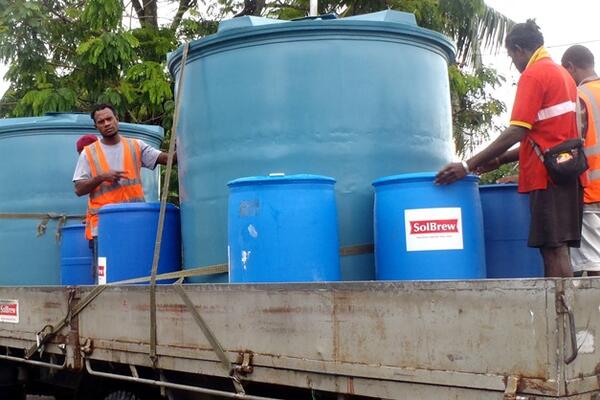 Members of the Solomon Islands Chamber of Commerce (SICCI) have joined forces to deliver clean filtered water to affected communities and Disaster Relief Centers in Honiara.

Solomon Breweries Limited (Solbrew) General Manager, Andy Hewson confirmed that a group of SICCI’s members have been assisting to deliver water, “Solbrew, Tongs, Solomon Tobacco and Silent World have conmmitted the first week immediately after the floods to deliver clean water from Solbrew filtration tanks to communities in need.”

Mr Hewson said “this relief effort would not have been possible without the collective dedication from all these companies, providing vehicles, tanks and staff, it’s been very encouraging to see who have stepped up in this time of great need.”
From the first Saturday after the floods and throughout that week a fleet of Solbrew, Tongs and Silent World vehicles have delivered up to 70,000 litres of clean drinking water mainly to relief centres throughout Honiara.

Mr Hewson also acknowledged the companies’ staff for their commitment and effort.

“I would like to acknowledge all our staff who have worked very hard to make this happen, most of the deliveries have finished very late at night, some at 2 o’clock in the morning,” Mr Hewson said “also I know that this is a difficult time for most people, with our Solbrew staff some have lost their homes, have had no water or power but they’ve turned up to work every day and put in the extra time to do this because we’ve all made a commitment to help.”

Solbrew is now liaising with the Rural Water Supply and Sanitation (RWSS) who are part of the National Disaster Management Office’s (NDMO) Water committee.

“RWSS is coordinating water deliveries to relief centres throughout Honiara and other affected areas in the country so their vehicles will now be collecting and delivering water,” Mr Hewson said “so we would like to advise the public who are in need of water to liaise with RWSSI, Red Cross or NDMO.”