Prioritising Climate Change Adaptations for Fisheries and Aquaculture in Fiji 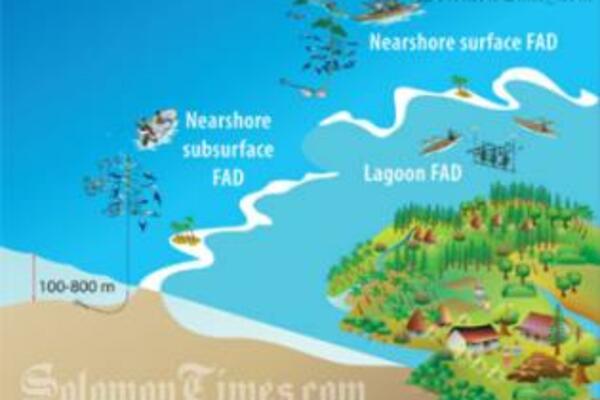 The workshop, which ran from 12 to 14 December 2012, was a joint initiative by SPC's FAME Division, Fiji's Ministry of Fisheries & Forests, and Ministry of Foreign Affairs & International Cooperation, AusAID, GIZ and the Food and Agriculture Organisation of the United Nations.

Participants heard presentations from lead authors of the book published by SPC, 'Vulnerability of Tropical Pacific Fisheries and Aquaculture to Climate Change' (http://www.spc.int/climate-change/fisheries/assessment/).

Under the workshop's 'end-to-end' approach, they learnt about the effects of the projected changes to surface climate and the tropical Pacific Ocean on fish habitats and stocks, and the implications of changes to these resources on economic development, food security and livelihoods. Working groups then identified the adaptations most likely to minimise the threats from climate change and maximise the opportunities. Wherever possible, participants also identified 'win-win' adaptations - those that address important factors driving the use of fisheries and aquaculture resources now that will continue to work efficiently, or be favoured by, the changing climate.

There was considerable interest in the projected effects of changes to the ocean on the distribution of skipjack tuna, which is expected to move progressively east. However, the workshop concluded that it would only be possible to advise the Government of Fiji about the likely extent of changes in skipjack abundance within the nation's exclusive economic zone once more detailed modelling was completed.

There was more certainty about the likely effects of climate change on coastal fisheries production. Professor Morgan Pratchett from James Cook University, Australia, explained that catches of fish associated with coral reefs were projected to decline by 20% by 2050 under continued high emissions of greenhouse gases. The main reasons for this expected decline relate to degradation of coral reef habitats due to more frequent coral bleaching caused by higher water temperatures, and the negative effects of ocean acidification on coral growth. This reduction in catch due to climate change would be in addition to any decline caused by overfishing and habitat loss from other causes.

Participants decided that inshore FADs are a key win-win adaptation for meeting the increased demand for fish from coastal waters from growing populations faced with degrading coral reefs. FADs increase access to tuna for coastal communities and should yield more skipjack tuna as this species moves progressively eastward, according to Dr Johann Bell, a Principal Fisheries Scientist with SPC's Fisheries, Aquaculture and Marine Ecosystems (FAME) Division.

The workshop also heard that climate change will favour freshwater pond aquaculture and the important freshwater fisheries in Fiji. Projected increases in water temperatures should enable farmed fish to reach market size faster and higher rainfall should allow ponds to be constructed in more places, although care will be needed to avoid the risk of flooding in some locations. Stronger river flow rates will create potential for expansion of freshwater fish habitats - something that needs to be included in cross-sectoral planning for low-lying areas near rivers.