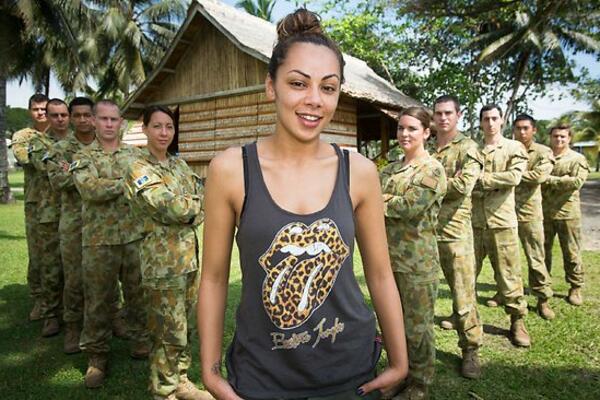 The Australian singer, Prinnie Stevens has provided a last hurrah for Australian troops who are ready to withdraw from peacekeeping in the Solomon Islands.

The pop star joined a long line of Australian entertainers who have performed for Aussie troops overseas when she took to the stage on the Melanesian island at the weekend.

The entertainment tour is the last of its kind as Australian troops prepare to pull out by the end of the September.

"They're all going home soon so they're just celebrating,"said Stevens, 32, who rose to fame as a contestant on season one of The Voice.

"It was awesome. It has been very different to the life I normally lead but I've loved it."

This month is the 10th anniversary since Australian forces were first deployed to the Solomon Islands. In recent years they've worked with local police on stabilisation and support.

"It is nice to be able to bring a little piece of home to the troops and it makes me really proud to be Aussie," Steven said. "These people give up their lives and aren't with their families for long periods of time so I would go anywhere to serve my country in the only way I know how, which is to sing."

The trip had a cultural and emotional impact on Stevens, who was born in Australia to Tongan parents.

"It made me homesick to see my family in Tonga," she said. "The culture here is so strong."

Forces Entertainment has provided an escape for Aussie troops deployed in warzones since the Vietnam War.