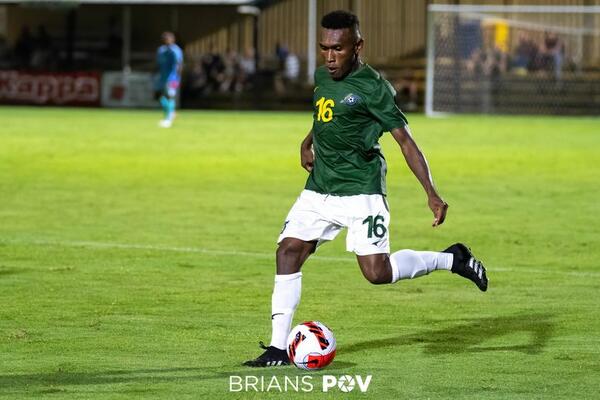 “It is a dream to represent Solomon Islands since when I was in high school. I remember telling my classmates that one day I will represent our country in the future,” he said.
Source: Brians POV
Share
Monday, 21 March 2022 15:23 PM

Everybody indeed needs a second chance in life and that’s what happened to Solomon Islands national team left-back Prince Tahunipue who was in tears when his name was not on the 30-man squad list last year.

But as fate would have it, he later got a call from the national team coach Felipe Vega-Arango to give him the good news that he has been included in the squad to play at the FIFA World Cup 2022 Oceania Qualifiers in Doha.

Tahunipue is one of the outstanding performers in the three friendly matches in Australia and made his international debut against Cook Islands playing the full 90 minutes on the left side of the defence.

He begun his playing career in 2017 with Naha FC in the Honiara Football Association (HFA). The left-back went on to captain a youthful Marist FC in his debut Telekom S-League season in 2018, which earned him a move to Southern United the following season. Most recently he signed with former champions Henderson Eels who finished fourth last season.

The 25-year-old was dreaming of one day wearing the national colours for the national team and he had the chance to make it two years ago with the Solomon Islands Under-23s but unfortunately could not make the final squad.

“It is a dream to represent Solomon Islands since when I was in high school. I remember telling my classmates that one day I will represent our country in the future,” he said.

A decent season with Henderson Eels landed him in the extended national team squad, selected by a technical coaching team before the arrival of Felipe Vega-Arango. However, much to his dismay, and despite working hard, dhe was not named in the 30-man final squad at the end of the TSL season.

“I had a good session with Henderson Eels in my first season with the former champions and I was in tears when my name was not on the first list in June last year.

“But I was so excited and thank God to get the call up to join the national team from coach Felipe after the season”.

Prince hails from Likimaea village, the Small Malaita native was the last player to be called by Spaniard Felipe in November 2021.

This was after Marist FC captain John Aeta was ruled out with a lengthy injury. He grabbed the opportunity with both hands and work tirelessly to impress the national team coaching staff.

In the current national team, Tahunipue is one of the only three players without international experience and never represented the country at club and youth level in the past.

“My experience with the national team so far is massive since it is my first time being part of the national team. It is quite hard for me in the first place especially adjusting to a professional way of training, the pace and intensity are very high but as time goes on, I started to manage myself and just follow what the coach always instruct as to do in training,” he added.

Tahunipue is the first choice left defender for Felipe and it is a decision that comes with a lot of trust considering the player has no international experience. The young lad stressed that he has a good relationship with the coach and believes that it’s down to following simple instructions.

“I owe a lot to coach Felipe since he has to help me a lot as a player and put his trust in me despite my lack of experience in international games. He has faith in me because whatever he says I tried my best to do it as a player in my position,” Tahunipue stressed.

Solomon Islands have the youngest side in the FIFA World Cup 2022 Oceania Qualifiers as the left-back lauds his teammates for their hard work behind the scene in training and maintaining a strong team bonding both on and off the pitch.

“I think for the team we work hard in training to put on a good performance even though we a young team. The team bonding and spirit is really good. For example, we always encourage each other when someone is going through a tough time and especially our senior players are leading by example. We aim to reach the final and have a chance to win it,” he revealed.

Tahunipue said his journey to the national team is not easy as he faced some challenges along the road.

“My advice to young players out there or youths who want to make a dream come true in life is never giving up no matter what and in all your ways acknowledge God for everything”, he concluded with this statement in an interview with SIFF Media.

Meanwhile, Tahunipue is optimistic Solomon Islands have what it takes to get a positive result against rivals Tahiti on Thursday (Friday morning local time) in the crucial group decider.