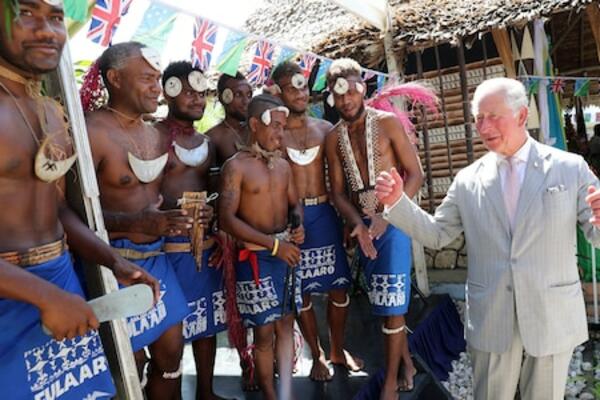 Prince Charles danced with a pan pipe band at the reception at the Governor General's residence.
Share
Wednesday, 27 November 2019 07:18 AM

Prince Charles has delighted a crowd of Solomon Islanders by addressing them in their native pidgin on Monday, concluding his first visit to the South Pacific nation.

The prince gave the speech at the Lawson Tama Stadium in central Honiara, at the culmination of a three-day visit to the South Pacific nation during which he launched a new ocean conservation initiative and a malaria elimination roadmap.

He passed on greetings of the Queen and said she had shared fond memories of her visit to the South Pacific nation with him.

Local media praised the prince’s pidgin. The Solomon Star reported the event as a “heart-warming address” by a “great but simple man”.

For some Solomon Islanders, the timing of the Prince’s visit carries extra weight.

“Many people aren’t happy with China here”, said Malcolm Konina, a taxi driver in Honiara, referencing the recent decision of the Solomon Islands to sever diplomatic relations with Taiwan and establish them with Beijing.

Prior to addressing the crowd at the stadium the prince gave a speech to the national parliament, condemning the scourge of domestic violence.

It comes in the middle of a 17-day local campaign against domestic abuse in the country. The Pacific region has some of the highest rates of domestic and family violence in the world.

The prince’s visit to the Pacific comes at a challenging time for the royal family, with the fallout of Prince Andrew’s relationship for convicted sex offender Jeffrey Epstein dominating global headlines.

It is the first visit to Solomon Islands for Prince Charles, and only the second royal visit to the country since Prince Phillip visited then British Solomon Islands in 1959 after the duke and duchess of Cambridge visited Honiara in 2012.