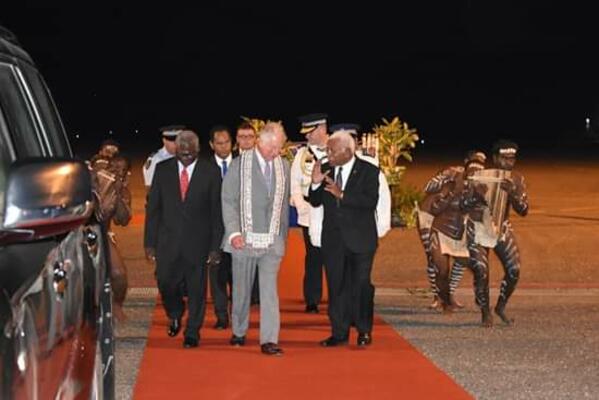 Charles, Prince of Wales, the heir apparent to the British throne as the eldest son of Queen Elizabeth II, has arrived in Honiara.

Commissioner of Police, Matthew Varley then invited Prince Charles to the podium to take the royal salute as a male and female platoon of the RSIPF as well as the Police Brass Band stood to attention.

The sound of Solomon Islands’ traditional pan pipers and wooden drums filled the air at the International Airport. This is Prince Charles’ first ever visit to the Solomon Islands.

Parade Commander, Assistant Commissioner of Police, Simpson Pogeava invited Prince Charles to inspect the parade and escorted HRH through the two platoons of officers who stood at attention in full ceremonial uniforms.

The RSIPF is mounting a 24-hour security operation during HRH’s visit until Monday 25 November 2019.

Members of the public are urged to cooperate with the police as Prince Charles will be escorted to various venues during his two-day visit to Honiara.