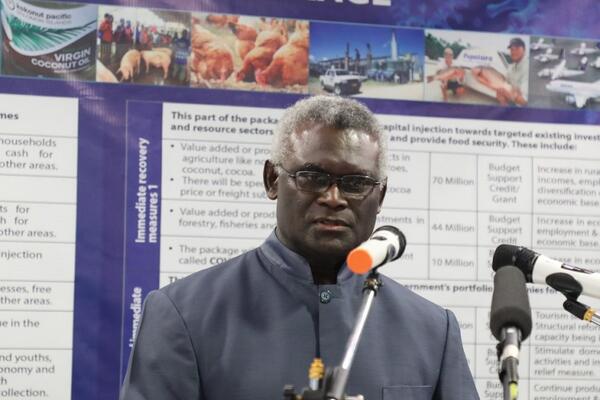 “The effective implementation of the stimulus package, especially coordinating the implementation phase in the short to medium term is critical,” he said.
Source: Supplied
Share
Monday, 04 May 2020 17:39 PM

Speaking at the ceremony, Prime Minister Sogavare said the Economic Stimulus Package is a demonstration of the Government’s Commitment to address the negative economic fallout of the pandemic.

The Prime Minister said the Government has decided to provide a first round Economic Stimulus Package of SBD $309 Million to ease the fallout of the pandemic, on businesses and the general population and to keep the economy afloat.

Firstly, he said the package is intended to address the immediate impacts of the crisis and is the highest priority.

“The further the country falls into an economic shack, the longer, harder and more painful the recovery will be. Therefore, it is more sensible to prevent people from losing their jobs now rather than trying to get them back into work once the pandemic has receded,” he said.

He said the fiscal response would require cash injections or other forms of assistance to support sectors, businesses and households directly affected by the crisis.

This he said would be done through existing structures and mechanisms.

“The underlying objective of the short-term package is to ensure as much money as possible flowing into the economy as quickly as possible to improve cash flow for businesses and individuals,” he said.

“This will enable our domestic economy maintain economic activity, production, employment and spending, and hence stimulate aggregate demand in the economy.”

Secondly, Prime Minister Sogavare said another guiding principle of the package is building the capacity of the economy to quickly recover and grow over the short and medium term.

“By investing into the engine of growth which is the productive and resources sectors, this initiative will support major players in the economy and inject resources into critical infrastructure that will support increased economic activity and create employment opportunities,” he said.

The Prime Minister said this component would focus on expanding household, businesses and government investment and spending into the economy in collaboration with development partners.

He added that the package would also have an equal urban/rural focus to ensure national social cohesion.

These programs include such as working with development partners to bring forward infrastructure spending plans and accelerating medium-term economic diversification programs in agriculture, fisheries, forestry and tourism.

Meanwhile, the Prime Minister said given the uncertainty on how long the pandemic will last, and the severity of its impact, this package is seen as an initial response to stimulate the economy.

He said it is critical that the benefits of the package reach the intended beneficiaries and that the desired outcomes of the program are realized.

Prime Minister Sogavare said it is the duty of his Government to ensure that enterprises and businesses that receive support under the package pass on the benefits to households and consumers.