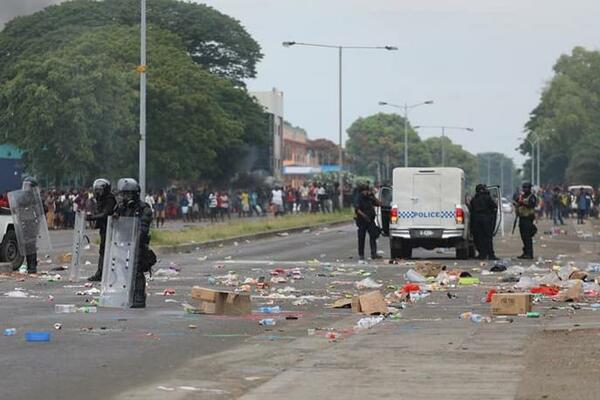 Sogavare says that this is our country and we must respect each other, and that taking the laws into our own hands will not solve anything.
Source: File: RNZ
By Samson Sade
Share
Friday, 11 March 2022 12:13 PM

Prime Minister Manasseh Sogavare has condemned rumours circulating that there will be a possible repeat of the unlawful actions that took place last November.

In his nationwide address today Prime Minister Sogavare says that his government will do all it can to make sure that this does not happen.

“I urge all our peace loving, law abiding and God-fearing Solomon Island citizens not to take part in any such planned action.

“In all the riots that happened in Honiara it is always the innocent ordinary citizens that become the victims of the greed and selfish agendas of faceless politicians and their cohorts who hide behind the garb of concerns for good governance.

“Do not fall victim to their agendas,” Prime Minister Sogavare said.

He says that this is our country and we must respect each other, and that taking the laws into our own hands will not solve anything.

“We cannot continue down this path of destruction and violence. I have great trust in our character and moral values and our propensity to do the right thing when faced with the choice between good and evil.”

Prime Minister Sogavare confirmed that he has advised for a date to be set for the next sitting of Parliament, with the appropriation bill being one of the main order of business.

The riots and subsequent looting in November almost toppled the Sogavare led government. Sogavare’s call for outside help was answered by Australia, who had a bilateral security treaty with the Solomon Islands.

The bilateral security treaty between Australia and Solomon Islands covers a range of foreseeable security threats, including natural disasters, and allowed for third country contributions.

Prime Minister Manasseh Sogavare had defended calling in Australian police and army troops for help, saying without them his government would be left "to the mercy of criminals and hooligans".