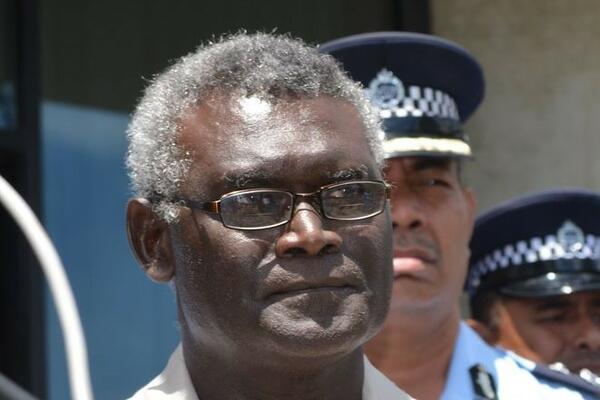 The Prime Minister says the government has launched two separate investigations into the incident.
Source: VT
Share
Wednesday, 08 April 2020 10:39 AM

Prime Minister Manasseh Sogavare has met with the MP for West Are’are constituency Hon. John Maneniaru and relatives of victims to express his personal condolences to families and relatives of the 27 citizens who were washed overboard the MV Taimareho on Thursday 2nd April.

The meeting was held after Parliament was adjourned following the debate on the Prime Minister’s motion to extend the state of public emergency.

The Prime Minister said that while any death is a tragedy, 27 deaths is unimaginable, as he urged us all to unite in prayers to support the family.

A statement from the Prime Minister’s Office (PMO) said the government is aware and appreciative that shipping operators are responding positively to implementing the government’s policy decision to assist people to relocate to their home provinces as a result of our COVID-19 measures.

“However, the government’s policy decision is aimed at saving and not costing lives. It is very important that shipping operators must respect and obey advice from our meteorology services on weather warnings, and they must also strictly adhere to their certified maximum passenger limits,” the statement said.

A lot of commentary has been carried by the papers and social media platforms regarding the search and rescue operations following the tragedy through which 7 bodies out of the twenty-seven washed overboard were recovered.

“Very little attention had been focused on the two key decisions that could have prevented this tragedy. Firstly, why did the ship sail when there were weather warning bulletins advising all ships about the approaching cyclone Harold? Secondly, why was the vessel allowed to load more than twice its maximum licensed passenger capacity?,” the statement said.

To help answer these questions, the government has launched two separate investigations into this incident.

The first part is already commenced – the preliminary investigation into the tragic incident in which the 27 passengers were washed overboard from MV Taimareho on the night of 2 April 2020. A Marine Investigation Officer has been appointed by the Director of SIMSA in accordance with the Shipping Act 1998, and Shipping (Marine Inquiries and Investigations) Regulations 2011.

The government does not intend to conduct a Commission of Enquiry simply because the proper mechanism to investigate maritime accidents already exist in law. It has already been executed and it will accomplish a comprehensive assessment that will be completed within a much shorter timeframe. Together with the Police investigations the outcomes of these investigations could result in charges being laid.

By contrast, a Commission of Enquiry is a very lengthy and costly process that could take a few years to complete which will not enable families affected by this tragedy to have closure for a long time.

While the two levels of enquiry proceed, the government is very aware that 27 of our citizens may have all lost their lives in this tragic incident and their families and relatives are suffering.

The government has therefore set up a humanitarian committee coordinated by the Office of the Prime Minister and Cabinet with representatives from the Ministry of Health and Medical Services, the Ministry of Traditional Governance, National Unity and Ecclesiastical Affairs and representatives of families and relatives that have lost loved ones.

This Committee is tasked to consider what and how best we can support these families as a nation, as a people and as a government.

There will be ways through which we can all contribute to ease the suffering of our fellow citizens whose loved ones had been taken away from them.

“We ask you all to listen out and to contribute what you can to what our committee comes up with to support our families most affected by this tragic tragedy,” a statement from the OPMC said.