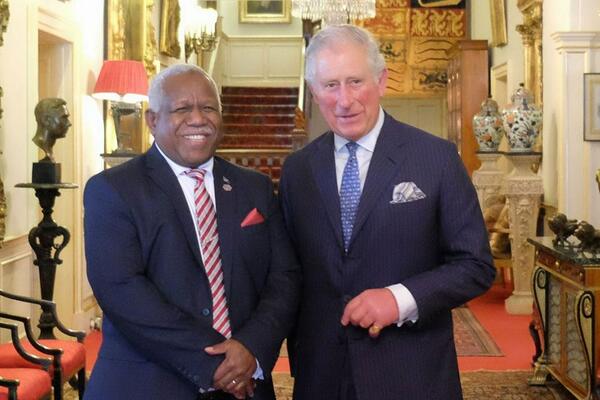 While in London, the Prime Minister will also hold bilateral meetings with some of the Commonwealth leaders and will also attend Her Majesty The Queen’s Opening of CHOGM 2018 at the Buckingham Palace.
Source: PM Press Secretariat
Share
Thursday, 19 April 2018 07:55 AM

Solomon Islands Prime Minister, Hon.Rick Hou has met with the Prince of Wales and the apparent heir to the British throne Prince Charles at the Clarence House, Sir James Palace yesterday.

During the courtesy visit, the Prime Minister informed the Prince of Wales on issues affecting small island states in the Commonwealth like climate change and sea level rise, sustainable fisheries and other issues affecting Solomon Islands and other Small Island Development States.

Prince Charles also welcomed Prime Minister Hou’s brief on the efforts Solomon Islands and other Pacific Island Countries have taken to protect the sea resources as well as monitoring fishing in the Pacific Region.

Meanwhile, Prince Charles has congratulated Solomon Islands for winning the first ever medal at the Commonwealth Games.

The Prince of Wales also informed the Prime Minister of his desire to visit Solomon Islands in the near future.

The Prime Minister will also officially open the Solomon Islands Diplomatic Office in London this week.