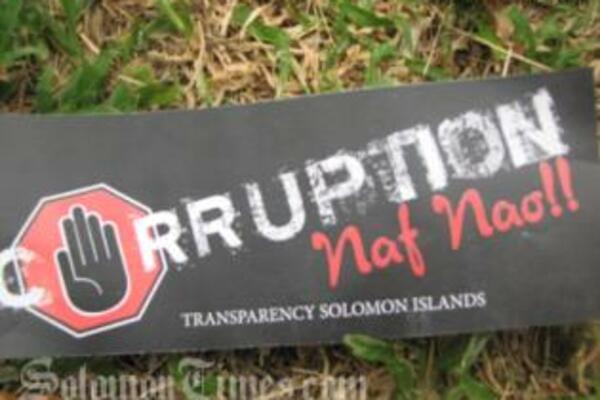 The Government's Anti-Corruption Taskforce is to hold a series of workshops across the nation to consult the public on how best to fight corruption, the Prime Minister, Dr Derek Sikua, announced last Friday.

The workshops, which will be funded by RAMSI, will provide an opportunity for the public and private sector as well as community organisations and other stakeholders to help develop the Government's proposed National Anti-Corruption Policy.

"Corruption is one of the biggest challenges facing the country," the Prime Minister said.

"Corruption undermines political stability, government effectiveness and delivery of essential services such as health care, education and law and order," he added.

"We are taking a range of steps to meet this challenge head on, and these workshops are an important part of that process."

The Prime Minister said he welcomed RAMSI's support for these workshops, particularly in light of the Solomon Islands Government - RAMSI Partnership Framework that recognises the importance of combating corruption across all areas of government activities.

"The workshops will help raise community awareness about corruption and provide an avenue for Solomon Islanders to express their views," Mr Wilson said.

Five workshops are planned over the coming months in Honiara, Auki and Gizo. RAMSI's support will help to cover the costs of the workshops.

The Anti-Corruption Taskforce was established by the Solomon Islands Government in February this year. It has been tasked to develop a national Anti-Corruption Policy and to make recommendations on anti-corruption reform, including the establishment of the Independent Commission Against Corruption (ICAC).

Since coming to office in January 2008, the Sikua Government has made it a priority to tackle corruption. This includes commitments to establish an Independent Commission Against Corruption (ICAC), implement political party integrity reforms, strengthen the independence and powers of the Auditor-General, create an Anti-Corruption Taskforce, develop a national Anti-Corruption Policy, and sign the United Nations Convention Against Corruption (UNCAC).