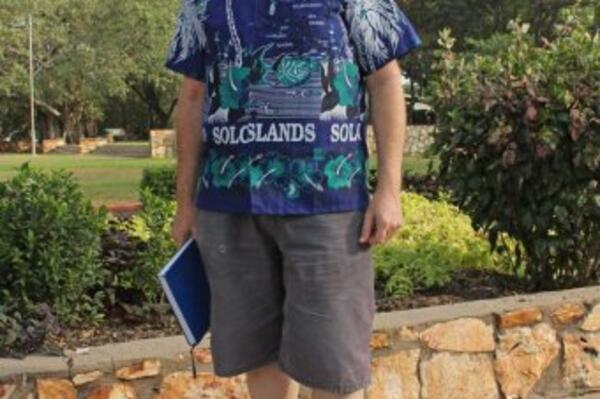 The Anglican Dean of Darwin, Keith Joseph, was living and working on the Solomon Islands when he realised the world was slowly drowning.

"In that time, I could see with my own eyes the damage being done," he said.

"And I could also see the effect [climate change] was having on my friends, their lives, and indeed their culture and futures."

Mr Joseph first arrived in the Solomon Islands in 2004 as part of an Australian-led peacekeeping mission.

He was ordained as a Deacon in 2005 and spent the next five years working with several parishes in the Solomon Islands.

He spent most of his time on the island of Guadalcanal living under local conditions in a small cottage made partially from thatched leaf.

"I didn't have a car. I just travelled on a communal truck. To get around the Solomons, I walked."

"My own adopted home village, where we recently tried to dig latrines, we got down a metre and hit the water table.

"You can't put latrines into the water you drink and clean from."

He said it was undeniable that the ongoing problems being experienced by his former parish were linked to climate change and rising sea levels.

"Firstly, it is affecting island groups across the Pacific and Indian Ocean. Secondly, I'm willing to trust 97 per cent of the scientific evidence and advice," he said.

"If you were sick and went to 30 doctors and 29 said you've got cancer and give up smoking and one said it's not a problem, what are you going to do?

"It's the same with climate change. The scientific evidence is in."

The report warns about climate change's severe and irreversible impacts and links the burning of fossil fuels to greenhouse gas levels being at their highest in 800,000 years.

Mr Joseph said it makes him feel "guilty" that humble communities in the Solomon Islands are facing problems due to carbon emissions by those in richer countries.

Mr Joseph came back to Australia in 2010 to work in the Hunter Valley, before being appointed as Dean of Christ Church Cathedral in Darwin in late 2013.

"When I moved back to Australia, the church gave me a house which was large. It was not environmentally designed," he said.

"In the case of Darwin, it requires air conditioning to be liveable, particularly at this time of year.

"Simple things that would have made it liveable were just not done: issues with shading, direction in relation to the sun.

"Even worse is you see all the boxes going out in the suburbs. They're just horrendously designed for the environment and require the use of power."

"The wealthy of Europe and Asia and America and Australia do not want to pay any more tax, do no want to lose the second car, the McMansion, the third refrigerator, the TV set in every room," he wrote.

"Let us be blunt and honest – in denying climate change, we are just defending our greed.

"You hypocrites are killing the islands of my friends, my brothers, my home."

Mr Joseph was inspired to write the explosive piece after an argument with climate change deniers in Newcastle.

He said there was a "strong Christian argument for looking after the environment" and that the earth was a gift from God that should be looked after.

"I do think that appeals to other spiritual traditions. The Aboriginals knew well that the land was their birthright to hand on to others," he said.

"Sadly, I can't see much political impetus for [stopping climate change]. There seems no great will to change the way we live or to move away from a coal-based economy."