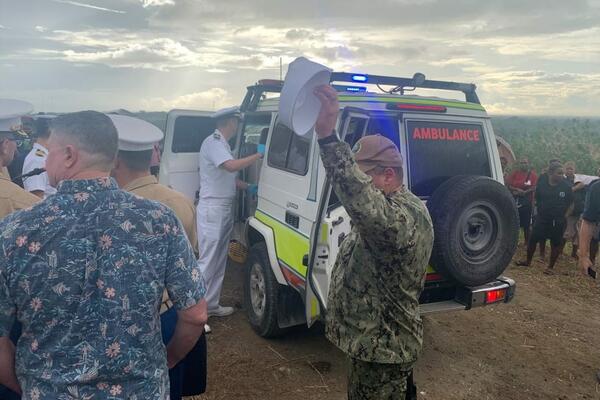 “It is with great sincere regret for such event to happen in front of our guests from Japan, United States, Australia and other countries today morning,” he said.
Source: Koroi Hawkins
Share
Monday, 08 August 2022 18:06 PM

Premier Sade stated “There is no room for such atrocious and inhumane act during the dignified remembrance event”.

“It is with great sincere regret for such event to happen in front of our guests from Japan, United States, Australia and other countries today morning” he said.

Premier Sade, on behalf of the Executive Government, then sends apologies to the brave Japanese Media personal , his family members in Japan, and the Japan’s Embassy in Honiara, Solomon Islands.

“On behalf of my Executive Government, I send my heartfelt apologies to the Japanese Media personal, his family members in Japan, and to the Ambassador of Japan, H.E Yoshiaki Miwa for this unfortunate incident” Premier Sade expressed.

He also states that such act would paint a national negative image to the tourism industry in the province and country.

He continues “This does not in any way, reflect the good behaviors of Guadalcanal people and province. That person must be faced with the full force of our law or must be addressed for further medical treatments if he mentally insane”.

Premier Sade then acknowledges the Bloody Ridge Community for their continuous community policing, and states that without their supports, the area would continue to experience more criminal activities.

In addition, he also appeals to the Bloody Ridge Community to continue keep their communities safe and secure from such criminal behaviors.

The Honorable Premier then thanks the quick actions of both U.S Marines, Japanese sailors, Solomon Islands Police and local bystanders who apprehended the person on the spot.

He also acknowledges the medical officers who quickly attended the victim.

Echoing his previous statement to mark the 80th Anniversary of Battle on Guadalcanal, the Premier states that he hopes that the island of Guadalcanal would provide an avenue for forgiveness, healing, and peace for both warring countries 80 years ago.

“It is my hope that the island of Guadalcanal will continue to provide the avenue and a role model island to attain world peace” Premier Francis Sade concludes.