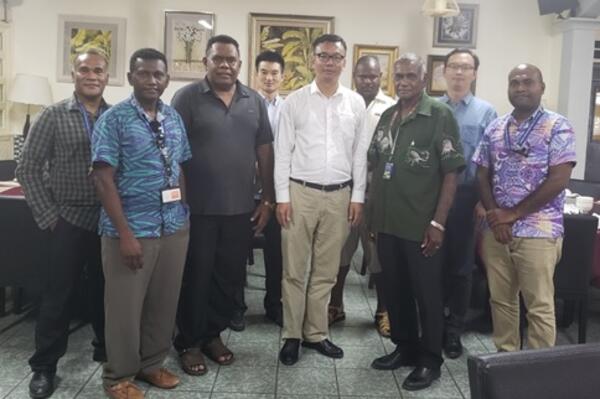 Officials from the Office of the Prime Minister and Cabinet together with Officials from the National Hosting Authority (NHA) and the Cabinet Sub-committee on the 2023 Pacific Games today met with officials from the Government of the People’s Republic of China (PRC) for updates on progresses made so far toward the preparation of the games.

During the meeting, His Excellency, Counselor Yao Ming from the PRC Government reiterated his country’s commitment toward the construction of the SPG2023 main stadium and other supporting facilities.

In his remarks, Counselor Yao Ming stated that his government is fully committed to seeing this project materialize.

According to Counselor Ming, once committed to an agreement, the government of the PRC will always carry through with its commitment despite challenges such as the COVID-19 faced by his country.

During the meeting, Counselor Ming also thanked the Secretary to Prime Minister for a support letter from the Honorable Prime Minister of Solomon Islands to the President of the Peoples Republic of China.

In response, Secretary to the Prime Minister and Chairman of the NHA Dr. Jimmie Rodgers conveyed gratitude to the People’s Republic of China for their steadfast commitment and support toward the games preparation, despite the ongoing challenges with COVID-19 in China.

Dr. Rodgers assured Counselor Ming of the Solomon Islands government support and close working partnership with the PRC for a timely implementation of the PG2023 facilities.

Other important issues discussed include updates on the status of the COVID-19 and the potential negative impact it will have on the timely implementation of the games facilities.

The construction is not due to commence until later this year depending on the signing of exchange of notes which should be executed by end of this month.

The meeting was organized as part of a regular communication initiative between both parties for sharing of vital updates toward the actual construction of the games stadium and facilities.