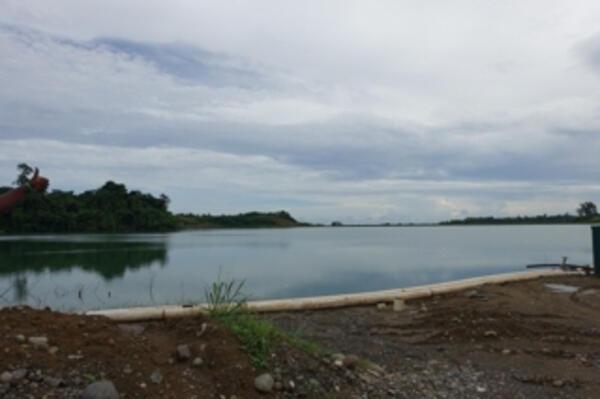 The water level in the TSF rose to dangerous level because of the stoppage of dewatering, in-filling by rainfall and surface run-off and the uncontrolled release of water from the Return Water Dam to the TSF by GRML.
Source: ramumine.wordpress.com
Share
Wednesday, 15 April 2015 07:34 AM

Solomon Islands, Ministry of Mines, Energy and Rural Electrification and the Ministry of Environment, Conservation, Meteorology and Disaster Management maintained their position that the main water at the tailing facility at the Gold Ridge Mine is unsafe.

In a joint statement the MMERE and MECMDM said the arsenic and cyanide levels in the water column are constant but remain above Australian and New Zealand Environment Conservation Council (ANZECC) and World Health Organisation (WHO) drinking water guidelines.

“What are more dangerous are the levels of arsenic and cyanide in the tailing sediments which are extremely higher than the ANZECC and WHO guidelines in the order of 30 and 30,000 times higher for cyanide and arsenic respectively,” the statement said.

It added that since GRML came under St. Barbara, it has been granted three licenses to dewater (with treatment) the TSF.

The first discharge license was granted on October 2, 2013 and it expired in March 2014. The second license was granted just before the first one expired and validated to expire on the August 21, 2014. Dewatering was aborted in April 2014 during the April flash floods.

On June 11, 2014 the company applied to further amend the previous license. Following a series of consultation with stakeholders including GRML, a revised license was approved and granted on July 8, 2014. The license was validated to expire on November 30, 2014.

GRML contemplated the impending wet season beginning in November and it lodged another de-watering application on November 7, 2014. Around the same time, the spillway at the Return Water Dam (RWD) situated above the main TSF was removed and released a significant amount of water into the TSF. The RWD unlike the TSF was built with the intention of storing water. A pollution abatement notice was also served on GRML 14 November 2014.

The water level in the TSF rose to dangerous level because of the stoppage of dewatering, in-filling by rainfall and surface run-off and the uncontrolled release of water from the Return Water Dam to the TSF by GRML.

On 4 December 2014, GRML’s application was declined and it was requested to install and commission a treatment plant before a discharge license can be issued. This decision was later endorsed by Cabinet in January 2015. Unfortunately GRML has not complied with the Government request as the regulator of the mining industry.

The statement said, “The Ministry of Mines, Energy and Rural Electrification (MMERE) is very concerned that all physical alterations to the current return water dam (RWD) have put additional pressure to the main tailings current water level and the walls of the tailings dam but GRML failed to comply with its obligation to comply with section 44 (3) to inform the Ministry and Mines Board its intention to undertake such physical amendments.”

It said the declination of GRML’s application in December last year was based on the following reasons:

? Experience has shown that since GRML came under St. Barbara, it has never applied in the first instance to dewater treated wastewater. It only resorted to treatment following advice from the Government.

? GRML had back-off from dewatering twice and on both occasions had a valid license. Their actions are counterintuitive and irrational from the perspective that dewatering with treatment is the only feasible option to reduce water level and at the same time meet environmental and downstream communities’ requirements.

? GRML did not comply with some of the critical conditions of its previous licenses (October 2013 and August 2014) especially those which can allay concerns regarding the waste water chemistry and assist their current request.

? GRML’s claims that arsenic and cyanide levels in the TSF fall under the recognized global environmental standards are based only on samples collected from the surface of the TSF water and from less than 10 sites in the TSF, which means that their results so far are not representative of the 63 hectare water body in the TSF.

? Dilution of pollutants (e.g. Arsenic, Cyanide) is one of the main bases of the GRML’s application to render the pollutants harmless, yet dilution is not the most suitable option for inorganic pollutants. Furthermore, cumulative maximum pollutant loading into the environment and their impacts have not been considered at all in any reports and in GRML application.

? The proposal from GRML shall entail pumping directly 2 million cubic meters of untreated waste water from the TSF at a rate of about 1,600 cubic meters per hour (1.6 million liters per hour – very vigorous). Pumping at such a high rate shall increase the potential to draw up sediments which are heavily laden with pollutants than the supernatant water. GRML has not provided adequate safeguards in their application to avoid the uptake of sediments during pumping. Take note that sediments are the main repositories (“banks”) of pollutants.

? The medium to long term environmental, economic and social impacts of the proposed discharge of untreated TSF waste water have not been considered as well in their application and despite numerous calls by SIG regulators for a report on relative undertaking, GRML just don’t bother complying.

? Allowing for the discharge of untreated wastewater into the natural environment amounts to setting an environmentally and socially unsound precedent for the mining sector. The MMERE is also supportive of the need to maintain high environmental safeguards in mining operations.

? Community leaders of the downstream communities when consulted on the basis of GRML’s latest application stated in no uncertain terms that they are opposed to dewatering without treatment. This is a position which we are very familiar with because of previous applications by GRML to dewater its TSF.

? A critical review of the submission by GRML and reports prepared by various consultants (including the recent WHO report) indicate that the known and unknown impacts of the dewatering applications have not been fully articulated and measures to mitigate the uptake of sediments during pumping and to cut-off pumping once sediments are observed to have been lifted were not identified as well in their application. Consequently the Government has to abide by the precautionary principle in this case.

It said since aborting full mining operation in April 2014, GRML has made two inter-linked proposals to the Government and they are the Sale of Gold Ridge Mine for a nominal amount of AUD$100 million to the Solomon Islands Government and the Dewatering of the TSF without treatment.
However, the statement said the government representatives in their mediation meeting with the GRML negotiator on the 24th March 2015 had not documented
records of any offer or negotiation over the AUD$1 Million funding for the construction of a treatment plant in exchange of dewatering untreated water.

“In the same meeting the GRML negotiator announced the impossibility of building another treatment plant by GRML. The point of contention seriously and carefully considered by the Government representatives was, despite the professed controlled engineering of the dewatering process, the non-treatment of the water to avoid polluted sediment percolation is a failed engineering in the part of GRML,” it added.

Furthermore, the statement said even if the AUD$1 Million in escrow would be subsequently available as indicated by GRML in their press statement; the amount is totally insufficient for any long term management of the TSF.

The statement said On the 4 February 2015, GRML through their lawyer issued a letter claiming material breaches of the mining agreement by the Government including a 90-day period for the Government to remedy the alleged breaches.
To this end, a small task force comprising of the SSPM, AG, PS/MECDM and PS/MMERE was set up to look into this letter. This group has been expanded to include PS/Resource Cluster within the Sectoral Reform.

It added that concurrent to the issuance of the above letter, GRML engaged a contractor to negotiate with the Government on their previous proposal to sell the company to the Solomon Islands Government and dewater the TSF without treatment.

The statement said it is important to note that GRML’s proposals and objectives remain the same although communicated in various forms and that the Solomon Islands Government representative group had received declaration from the negotiator (broker) that GRML is broke and that it is impossible for the company to fund any construction of the TSF treatment plant relatively but interestingly GRML has not filed for bankruptcy.

GRML is a subsidiary of a reputable Australian stock market listed company. Its conduct so far in relation to TSF management and for not fulfilling its obligations stipulated in the Mining Agreement and Mine Plan appears to be divergent of its international industrial best safety practices and its status in general.